Stay Off Your Toes – by Vinh Huynh

I have had the benefit of working with some great athletes, and coaching them at various levels – everything from local to international.

One of my favorite things to do is watch each weightlifter and analyze their technique. In this process, I look at each attempt for similarities, differences, and what I’d coach. Most importantly, I 100% believe learning more about qualities that factor into successful and unsuccessful lifts only makes you a better coach.

Much like Travis, I’m not set on any one particular method. However, I do have a “foundational” technique I use with newer athletes, and I continually evolve it to work best for that one person.

As a coach, I was very fortunate to have had two of America’s best coaches as my mentors, both Travis Mash and Don McCauley. One of the many things they both stressed to me was the importance of continually learning because, “You’ll never know when you have an athlete that will benefit from a technique considered different.” For those of you who know me well, you’ll know the foundational technique I coach is closer to Don McCauley’s than anyone else’s – something he coined as the Catapult Weightlifting technique.

Today I want to continue the technique conversation Travis wrote about in The Most Common Mistake In Weightlifting. And no, it’s not going in the direction some of you might think it’s going, which is “Should a weightlifter purposefully extend up onto the toes and jump their feet?”

Instead, I’m going to expand a little on what Travis wrote – and talk about pulling from the toes. As long as you understand the fundamentals of a lift, you probably know enough to follow along. Some of what I’m writing is taken from an outline for a book Don and I were working on prior to him getting really sick and ultimately passing away. One day I’ll get it finished, but for now I’ll share some of it with all of you. 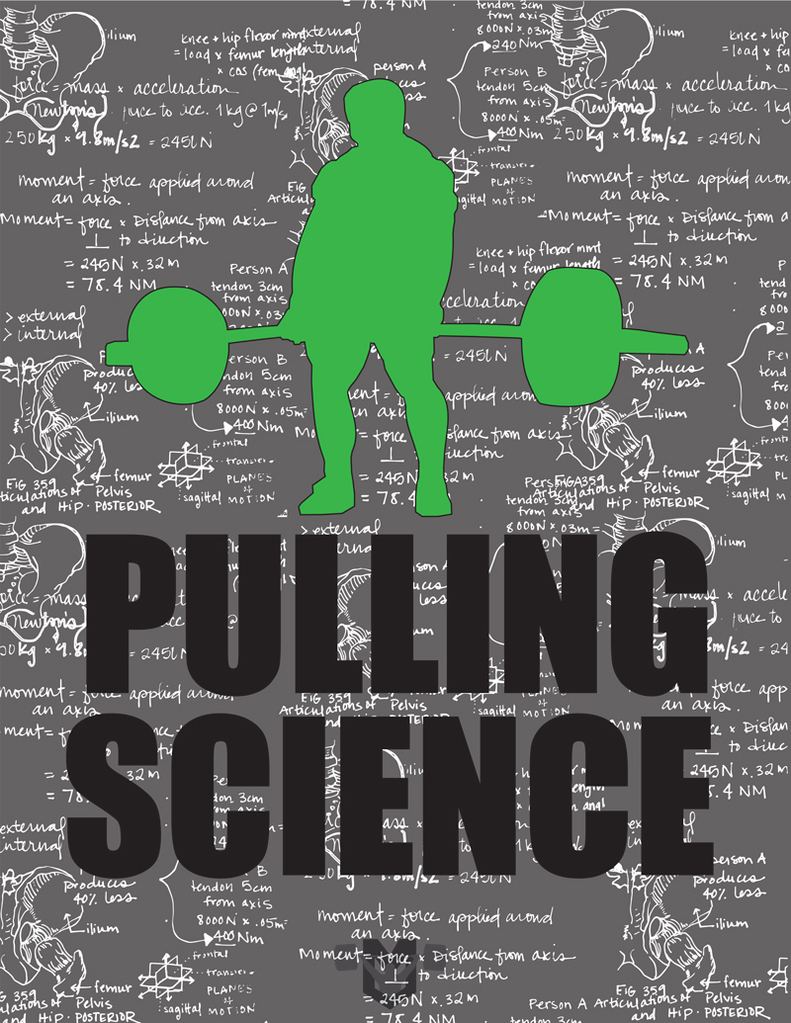 Master Technique and Programming for the Conventional Deadlift, Sumo Deadlift, and Clean Pull

After combing through the research and interviewing the experts, the result is a guide that will refine your technique and boost your pull in a safe and effective manner.

In Travis’ original post, he writes about qualities of the start position, which I call the set position:

Please note, I’m not going to continually write, “for most athletes,” so just know nothing is 100% absolute in this sport.

Head position. I like athletes to have at least a slightly raised chin above a neutral position, why? I have found it’s easier for athletes to maintain a tight upper back in this position. However, this is slightly debated in the weightlifting community because of whether it’s “optimal” to have the cervical spine in that position.

Eyes. When an athlete is standing tall, I want him/her to look straight out and I call that the “horizon,” then find a spot 6-12 inches above that. When athletes are in the set position, it’s hard to look at a focal point that high with just eyes, so naturally, athletes will raise the chin up. Mostly, I have athletes do this because I want them to make sure they’re at the top of their pull before going under the bar, and setting the focal point too low might make them feel like they’re further along in the pull than they actually are.

Shoulders. In the snatch, shoulders should start slightly behind the bar. For some, leading edge of the shoulders might be just on top of it; for a few, leading edge of the shoulder just in front of the bar at set. In the clean, shoulder should be on top of the bar. For some, leading edge of your shoulders should be slightly in front. Where your shoulders are in reference to where the bar is at set is going to be dependent on a lot of factors, but for the most part I like to see athletes with a more upright torso at set (and make sure you don’t interpret that as “vertical torso”).

Hips. I’m a fan of lower hip positions at the start because the bar and your center of mass will start closer and stay closer throughout the duration of the pull. Therefore, in the snatch, I like to see hips low. I get a lot of local coaches commenting on how low my athletes start, especially in the snatch. Ideally, hips will be at minimum below the knee crease. In the clean, hips are usually somewhere around the level of the knee crease. With these hip positions, our athletes have found it easier to stay centered over their base of support (their feet) during the pull, are able to pull longer and sweep the bar in more – all while minimally using their posterior muscles we’re reserving for hip extension (which we’ll use later).

During the start of the pull, the athletes I coach will have hips that rise slightly faster than shoulders, but that’s due to how low their hips are at set. The weight balance in their feet should be moving from the balls of feet back toward the heel. Now at meets, you’ll hear me tell the athletes to “keep their heels down” as they pull, but this not the same as keeping all of their weight on their heels – it’s simply a cue that I’ve used to make sure they don’t leave their weight on the balls of their feet.

Prior to coming to set, you’ll see lots of athletes raise their hips one last time while raising the balls of their feet off the ground and this is something our athletes do a lot too. It’s simply a reminder of where the weight balance needs to go as they pull, and I tell most athletes to think of it being just in front of their heels. To help newer athletes, and even sometimes veteran athletes, recognize where their weight balance is I have them do a simple drill:

Midfoot is a hard one for newer athletes to recognize, so sometimes I have them stand on a small change plate in each of those positions, so they can feel it more. I’ve also used this drill with veteran athletes who’ve had problems with weight distribution in their feet as they pull.

Toes is definitely somewhere I do not want the athlete to pull from, ever. However, there are some coaches who coach their athletes to pull from their toes. I’m a naturally inquisitive coach and have asked why. The common answer I get is because the quads are such a powerful mover in the extension, so it’s to not shut off the quads. But my follow up question typically is, “Why would an athlete want to pull from the toes throughout the entire process, when they can readjust up top (double knee bend), which puts an athlete into the right position to use their quads in the extension?” This is usually where coaches who instruct this get defensive, but I’m just looking for clarification on the objective – or perhaps I’m just misunderstanding them. Except, when I see their athletes simulating pulls with their heels floating off of plates, a plywood board, or the end of a platform – it leads me to believe they’re actually being coached to pull from their toes. For the record, don’t do this – your feet are your base of support, and if you’re up on your toes and trying to be “over the bar” during the pull, you’ve reduced how much margin of error you can have by a lot.

As you’re pulling, aside from wanting the weight distribution in your feet to work from front to over midfoot (again I sometimes say heels in meets just to keep the athlete off his or her toes), you want to envision the barbell working back too. Ideally, if you’re watching an athlete from the side, you can see the barbell “angle back.” For some this might be easily noticeable, but for others this might be slight. The vast majority of the time you will not want to see the barbell go forward at all, or “out and around the knees.” With some athletes the barbell might look like it’s moving in a vertical line – but general rule of thumb, not out or away from the athlete. Read Travis’ original post about sweeping the barbell back as you pull and the “McCauley Board” if you (or your athlete) is having a hard time with this.

Now I’ll expand – As the bar passes the knees.

Now, I’m not picking on CrossFit or the USAW Level 1, and it might be taught much differently now versus when I took the CrossFit Level 1 and USAW Level 1 certification – I’m just calling it out as to why you might see a lot of newer weightlifters doing this versus continuing to get their legs long. Also note, there is nothing wrong with doing it this way – in fact this is how lots of the European weightlifters do it.

As the bar is passing the knees, the shoulders/torso starts to “open,” or rise faster than the hips to start initiating the second pull. Remember, our athletes typically start with a lower hip position, so their hips at the start of the pull will rise faster than their shoulders (but shoulders always being higher than hips). The further they get into the pull, there’s only so much more they can lengthen legs before the shoulders/torso starts to rise faster or “open” – and they’ve started transitioning into the second pull. Now, I refer to this as variable back angle, because a good amount of our athletes do not pull with a static back position, and it’s ever changing.

Here’s a couple of good videos demonstrating this, both by National Level Medalists and girls who’ve both represented Team USA:

Next stop Jr Pan Am Championships where Nadeen looks to top this 114kg Clean and Jerk.

We have a feeling there will be a few more hookgrip videos for Adri In the years to come!! #Repost @hookgripusa ・・・ @adraakae (59kg) clean and jerking 109kg/240lb at the 2019 USAW Nationals! #hookgrip

As you can see in both videos – as the bar starts passing their knees, the legs are minimally extending and the shoulders are (or torso is) opening (basically shoulders rising faster than hips as they continue to pull and transition into their second pull). But take careful note of the double knee bend which is delayed until they’re ready to “catapult” the bar. This is when it happens, and it is the end of the second pull. It’s much easier to see this in the slow motion portion, which is why I recommend watching ATG, Hookgrip, and other slow motion videos of lifts to train your eyes.

If everything up to this point is done correctly, the bar should literally feel like it’s being catapulted up – and the athlete

Then there’s nowhere else to go other than to slingshot yourself under the bar to complete the lift. I hope that helps to shed a little light on how I keep athletes off their toes and from missing lifts a mile in front.

Mechanisms for Speed with Lee Taft – The Barbell Life 362