How Training for GRID Helped My Weightlifting by Rebecca Gerdon

We are looking for partners for our Mash Mafia Weightlifting Team with the immediate need on sending our onsite athletes to the Junior Nationals. We are not looking for handouts. Here is what we are offering:

Here is where you Donate:

How Training for GRID Helped My Weightlifting 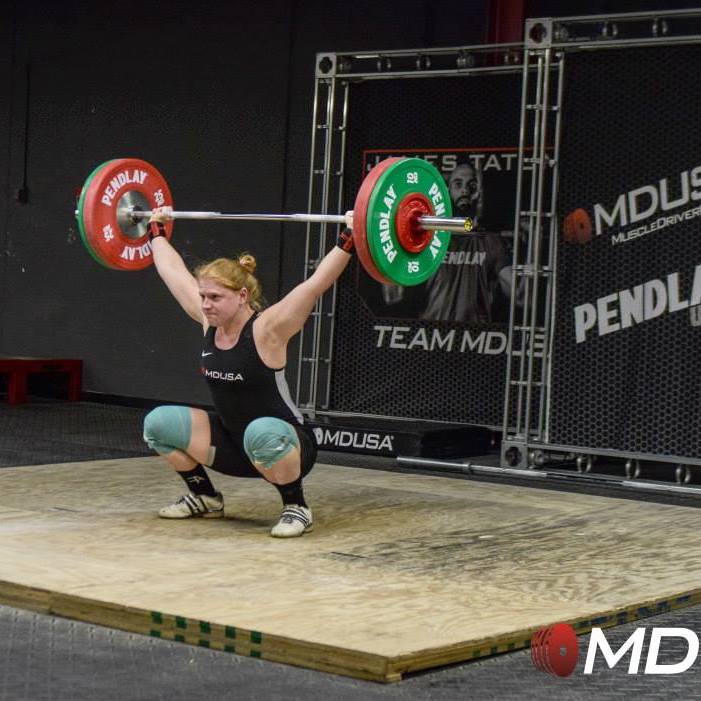 GRID is a new sport that has emerged within the last two years that is quickly catching on and becoming more popular. GRID is a professional sport where co-ed teams go head to head in 11 different races involving both lifting and gymnastic elements. This sport is incredibly fun to watch and as I quickly found out, even more fun to take part in. The cool thing about GRID is that it allows athletes to specialize in certain elements. As a weightlifter, I wanted to be a strength specialist, the athlete whose main job was to handle the heavy weights in each race.

I first learned about the sport in the summer of 2014 when my friend Shanna Duvall was drafted to the Phoenix Rise team. Later that year, the semi-finals were held in Charlotte and I was able to go and watch the matches in person the whole week. From the first race I saw, I was hooked. I wanted to know everything about this sport and I wanted to try it for myself. 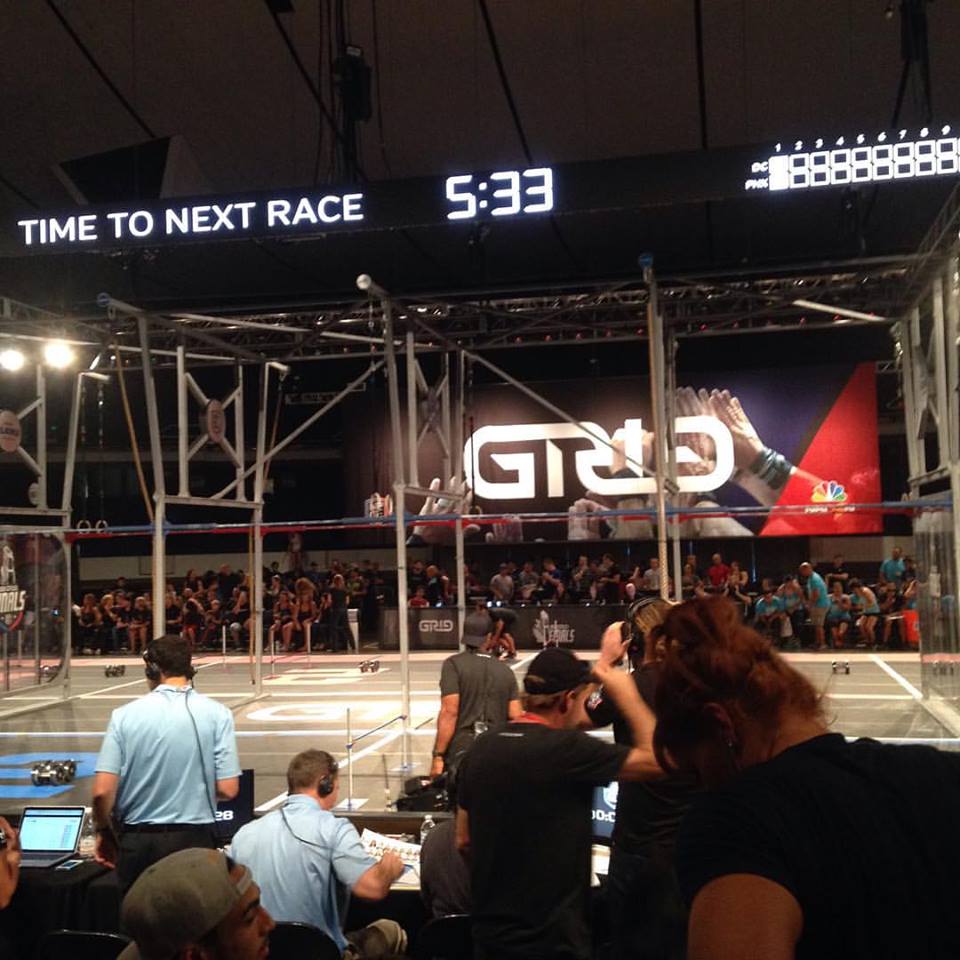 I happened to meet one of the head coaches for OPEX, Robin Lyons, in January of this year and after talking with her, she agreed to program for and coach me with the goal of preparing me for the National Pro GRID League tryouts.

Along with her programming, I was still doing nine training sessions a week at MuscleDriver USA for weightlifting so my training volume was at an all time high. I was doing at least two and sometimes three training sessions everyday except for Sunday, which remained a rest or active recovery day.

Robin is a brilliant and amazing coach. I feel so grateful to have had the opportunity to work with her. After working with me for a few days, she quickly identified my biggest weaknesses for GRID: aerobic capacity, pulling strength, barbell cycling ability, and upper body strength.

Moving forward, my programming from Robin involved a LOT of low intensity aerobic work – at least 30 minutes of work a day on a rower or an air dyne, heavy RDL’s once per week, upper body pushing and pulling work twice a week, and some higher intensity conditioning pieces that incorporated barbell cycling and GRID race simulations. 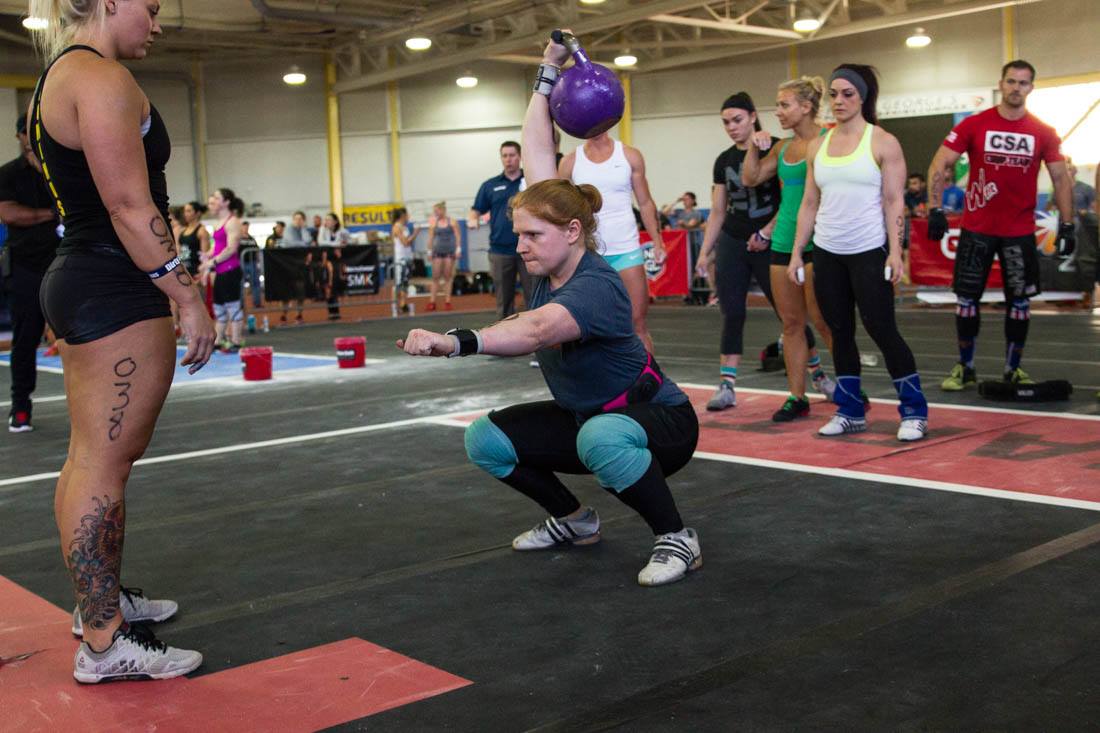 My biggest concern was that my weightlifting performance would be affected. However, this was not the case. I was able to complete all of Robin’s workouts as she wrote them and still hit all my percentages in the MDUSA workouts. I even had a big string of PR’s in the clean and the snatch while under this high training load.

GRID involves a lot of barbell cycling – moving a barbell very quickly and repeatedly through movements like snatches, cleans, deadlifts, etc, all of which requires an extremely strong posterior chain. The heavy RDL’s were programmed to address this and I quickly noticed a carryover to my snatch and clean pull off of the floor. Lifts that used to feel heavy coming off of the floor started to feel light. I was also able to maintain better positions throughout the my lifts. I did both snatch and clean grip RDL’s in a 2-5 rep range with a tempo that usually involved a 3-5 second eccentric and a 2-3 second pause at the bottom. A couple of months after implementing these heavy pulls, I hit a PR clean and a string of PR snatches. I had never felt so strong!

Ever since the emergence of CrossFit, barbell cycling has been hated by weightlifting coaches. High rep olympic lifts are blamed for allowing imperfections in technique and increasing the risk of injury. It’s true, the technique for higher rep lifting is different than for max lift, with the main difference being higher hips at the start, but I found that my weightlifting technique remained sound and I became faster and stronger. I started to consider the two “styles” to be two completely different lifting techniques: one for olympic weightlifting and one for barbell cycling. Barbell cycling also has the added effect of improving grip strength because the bar remains in the athlete’s hands for a longer period of time. 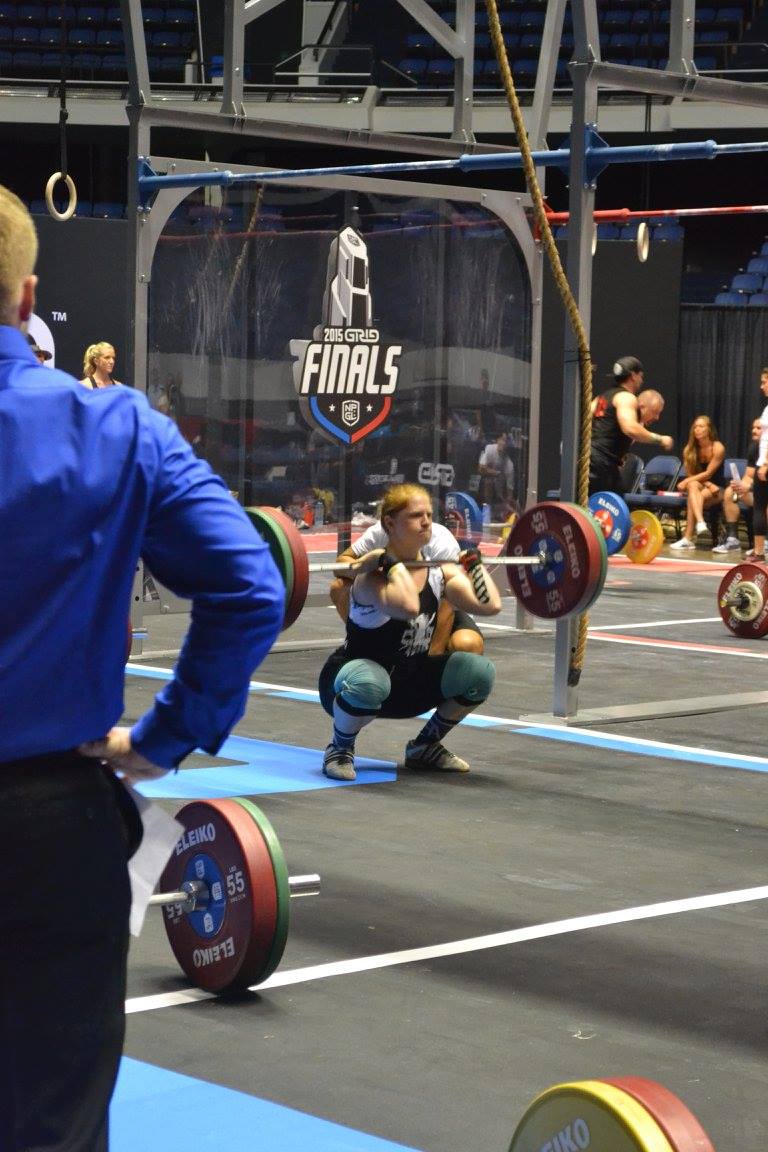 With GRID everything needs to be fast. The weights are relatively light and the athletes need to churn out reps as fast as possible to finish the race. I feel that working with these lighter weights and really making speed the main focus, helped me learn how to move faster under the bar. I noticed a huge difference in the speed of my turnover – how I was able to quickly pull myself under the bar.

The upper body work was implemented to help me handle the higher volume of pressing and pulling required in a GRID race. Athletes have to be able to cycle through high reps of snatches, jerks, thrusters, etc. all which require lots of strength and stability in the shoulders. I was doing strict presses, rows, push presses, pull-ups, and other scapular stability exercises like wall walks and front leaning rests (basically a plank on the hands) each week. I quickly noticed a difference in how I was able to lockout my snatches and jerks better. I had historically had an issue with my lockout that was pretty much resolved after a few months of this type of training. 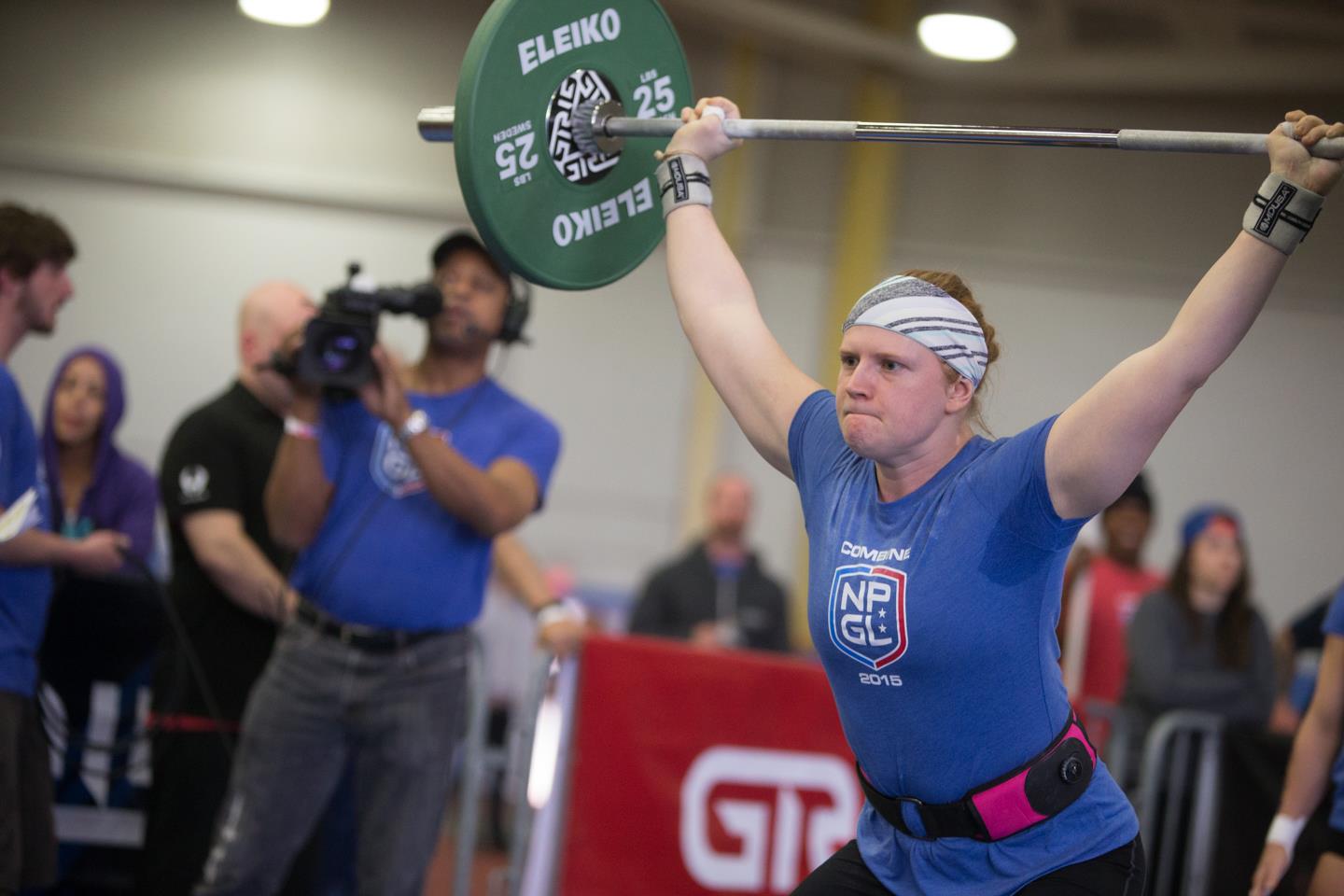 Another thing about GRID training that was beneficial for me was that it was fun and exciting. Earlier this year I had been feeling burned out with weightlifting. I was coming off of wrist surgery and my lifts were not improving. GRID was something that made me excited about training again. It was awesome to push myself in new ways and see what I was capable of. Once my snatch and clean & jerk started to improve again, I fell back in love with weightlifting.

With Robin’s help I made it to the last step of the tryout process for the NPGL, the combine in Maryland. I also got to play on an amateur team in the Southern Amateur GRID League, which was the most fun athletic experience I think I’ve ever had.

While the period from January through March was physically the hardest training I’ve ever experienced, it was also extremely rewarding and I learned a lot. I am incredibly grateful to Robin for working with me and helping me to take my athletic ability to the next level. GRID is such a fun and exciting sport and I want to see it grow and continue to take part in it.

The “Mash Squat Every Day” E-Book has dropped. You get 170 Pages, FOUR 12 Week Programs, Mind Set, and Variable Explanation!

The Mash Squat Every Day Book 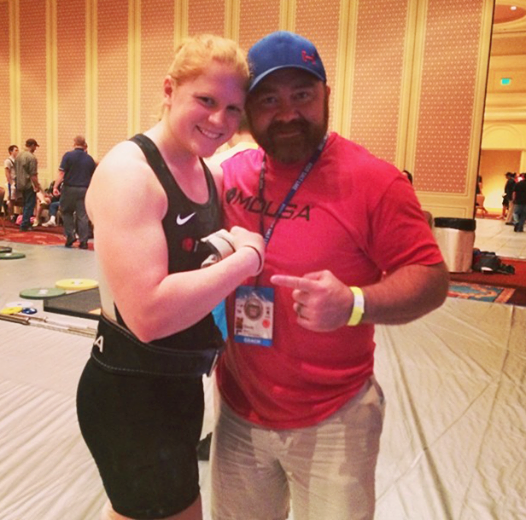