The Connection Between Obesity and Mental Health

Check out one of our Ten E-Books:

The Connection Between Obesity and Mental Health

At the end of June I wrote an article about exercise and ADHD (if you haven’t checked that out or shared with friends and family feel free to do so here). I’d like to pick up where I left off in the article by discussing where we as coaches, athletes, and communities are headed.

During my first semester graduate school for Clinical Mental Health I made it a point where I needed to make sure my nutrition was at its best, I was training for a half marathon. That semester, and the rest of the year, I watched as my peers succumbed to the pressures and stress that graduate school elicits. However, I was unphased and was able to perform better than I ever had before academically. I then realized if my mental health, nutrition and fitness were all optimal then my ability to maintain resiliency to stress would be maximized (which is now backed by data in John J. Ratey’s books SPARK and Go Wild). From this I concluded that to truly have a holistic life and to encourage my clients to be as healthy as possible I must also operate from this position.

That was in the beginning of 2011, since then I have been working as fast as I can to stay ahead of the curve. I’ll be sharing my predictions of where I see fitness and mental health heading; for the record I had the honor of speaking with Chris Moore before he passed at the Mash Strength Spectacular in 2015 and he , so eloquently, agreed that we as a society need this. Since then I have spoken with Mike Bledsoe, Travis Mash, and Zach Even-Esh on this topic and all are in some form of agreement that the fields of mental health and fitness are connecting.

But first, where we are:

The CDC, Centers for Disease Control and Prevention, have estimated that 300 million individuals are obese worldwide and approximately 75% of adults in the United States are either overweight or obese. The Department of Health and Human Services reports 300,000 deaths occur each year due to overweight or obese related issues. (U.S. DHHS, 2007)

If you remember from my last article, where I talked about ADHD, I also mentioned that there’s a 50% chance that you in your lifetime will have a diagnosable mental health disorder. For those outside the field, the behavioral health population is comprised of individuals who have been diagnosed with a mental health disorder, psychiatric, or substance use disorder. This may include, but is not limited to; mood, anxiety, psychological changes or decline, and/or another brain disease resulting in a cognitive alteration.

To summarize, if you live in the United States you have a better chance of having yourself or someone you love being overweight/obese or one of you having a mental health diagnosis than you do if you were to flip a coin and it landing on its side. 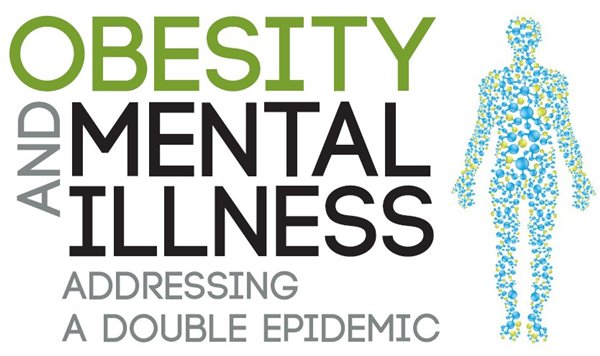 But now it’s dive into the research and the numbers of this comorbid issue:

A prevalence study conducted on men and women with severe mental illness found that 29% of men and 60% of women are overweight or obese. They then compared those numbers to the general population and found that 18% of men and 28% of women were obese or overweight (Daumit et al., 2003). A different study looked at 276 persons with mental health diagnosis found that 22% of those people were overweight and 59% were obese (Strassnig et al. 2003 as cited in NASMHPD, 2008). Although the sample sizes aren’t ideal, and as we know “correlation is not causation”, the link between being overweight or obese and having a mental illness, regardless of gender, is alarming and almost unbelievable. We see a huge disparity between those who are well adjusted (or have no diagnosis of a mental health disorder) and those who are overweight or obese with a diagnosable disorder, however both of these studies were conducted looking at adults.

What is most alarming is that these comorbidities in our youth will continue into their adulthood at an alarming rate, 50-80% of obese school-aged children will stay obese into adulthood (Levine et al., 2001; Daniels et al., 2005). This is to say nothing of the physical and cardiac health concerns that these numbers raise. That is for another article written by a different expert; the remainder of this article will be talking about the mental health components and how the powers-that-be think they can solve this problem.

Let’s discuss the barriers that individuals with a mental health disorder face that inhibits their ability to maintain a healthy weight. Social factors including lower economic status and lower levels of education are linked to obesity (Drewnowski & Specter, 2004; NASMHPD, 2008). Not to mention the areas is referred to as “food deserts” in the United States in which individuals are surrounded by fast food restaurants in lower-income neighborhoods (CDC, 2010).

The medications prescribed in the anti-psychotic family are highly associated with overweight and obese consumers. Many of these consumers are not on medications for a short duration, but for years or their entire lifetime (Susce, Villanueva, Diaz, & Leon, 2005). However, this is not only limited to only antipsychotics, antidepressants are frequently prescribed to adolescents and adults as well, and are also associated with weight gain. In particular, Selective Serotonin Reuptake Inhibitors or SSRI’s, prescribed for anxiety and depression, are in the short term associated with weight loss , but after a few months of use weight gain can occur (Fava, 2000).

So what is the solution that the powers that be believe can solve this problem?

Many would look to the Behavioral Healthcare Providers or those agencies run by the state or private facilities that treat mental health disorders to address obesity during intake and subsequently educating them on the importance of maintaining a healthy diet and an exercise routine (Strassnig et al., 2007). Additionally, it has been thought to address the issue with the family as a whole by including providers, schools, and communities to work together to promote a healthy lifestyle (Barlow et al., 2007). o their credit it has been shown that individuals can experience more change in groups (like their families) to overcome barriers towards weight loss and maintenance (McDevitt & Wilbur, 2006). Additionally, it is true few studies have targeted severely obese children, some evidence has shown that family-based interventions maintain weight loss over 10 or more years (Epstein, Myers, Raynor, & Saelens, 1998; Epstein, Valoski, Wing, & McCurley, 1994).

Finally in the literature review, “Weight Management Strategies for Adults and Youth the Behavioral Health Conditions” it was concluded that these community behavioral centers were the logical choice to not only monitor but treat those with mental illness and those struggling to maintain a healthy weight. It was also concluded they were able to limit psychiatric issues and also the risk factors that being overweight and/or obese presents. Ultimately, they concede that the research and data is not conclusive and “still in utero” as to what the best evidence-based programs and policies are best to eradicate this issue of comorbidity (Devine, et al., 2012)

Although this sounds idyllic, the largest form of evidence as to why these above solutions will continue to fail, and is not a long-term solution across our country is that you cannot teach what you don’t practice. Take a look back at the above statistics at the top of this article, 50% of our population is either obese or overweight! This includes those Mental Health Providers and those people in these agencies that would be assessing and communicating the information on living a healthier lifestyle. So I reiterate: you cannot teach what you don’t practice. I have worked in quite a few mental health agencies across Southwest Virginia and I can say with confidence these “solutions” will fail.

Now the impetus falls to us, those strength and conditioning coaches, athletes, trainers, members even who already live an optimal nutritional and exercise lifestyle to take that small leap towards learning and understanding mental health and recognizing the signs and issues. Armed with a minimal amount of mental health understanding and appropriate referrals and systems can be placed towards getting people with diagnosable disorders the help they need.

Until then I will be working to turn my practice and gym into the solution; the one-stop shop for real wellness a place where you can top out the pillars of mental health, nutrition, and fitness. Only then can we truly live holistic lives and lead those in need to holistic wellness.

It doesn’t stop here, in the coming weeks I’ll be discussing more and more things mental health and fitness.

About the Author:
Gabriel Villarreal is a the owner of Mash Elite Affiliate “LostBoys Strength and Conditioning” in Roanoke, VA. Additionally, he owns his private practice “ADHD Counseling in the Roanoke Valley” where he is a Resident in Counseling. Lastly, he co-hosts a podcast “Informed Consent” about community mental health to support incoming professionals.

If you’d like to learn more about anything you read above Gabriel would be more than happy to answer an questions, concerns or just to continue this conversation. Feel free to email him at Gabriel@roanokeADHD.com

The Art of Coaching with Bobby Sirkis – The Barbell Life 377