A few days ago I posted a video on Twitter of a high school athlete performing a clean. At least it was their version of a clean.

This is why we need high school strength coaches! Please don’t tell me that can’t afford it anymore. That can’t afford not to. @ZEvenEsh @johnwelbourn @Coach_BrettB @RobTrainSystems pic.twitter.com/6tHuFw85ZA

The video and my statement sparked a 500,000-view discussion that I believe might have started a movement. Strength coaches from around the country chimed in with their thoughts and suggestions. People such as Kelly Starrett and Zach Even-Esh voiced their concerns, and we all agreed that the responsibility falls on us to correct this issue.

Before I get into how we can change, I want to paint a picture showing the real need for change. The only argument against having certified and experienced strength coaches in our high schools was that of money – that high schools couldn’t afford their history teachers, books, and/or materials, so they aren’t going to fork over the money for a position like a high school strength coach.

So what do I think about that issue? I get it. Money is tight. But think about it this way. The weight room can be the most dangerous room in any school. When proper movement is taught under the watchful eye of a competent coach, the injury rate is somewhere around 3.3 injuries per 1,000 contact hours. This number is lower than most all other activities. For example soccer experiences about 35 injuries per 1,000 contact hours. However, these numbers are thrown out the window when a coach isn’t competent, or worse isn’t even watching the class. Sounds crazy, but I have witnessed multiple high school weight rooms with a missing coach.

When a coach isn’t competent or even present, the weight room can be a death trap. The bench press is the most dangerous movement in the weight room – especially when performed without a spotter. I’ve watched heavy weights dropped from arm’s length onto chests, throats, and even heads. Anyone who has ever lifted weights has probably been pinned under a bench press due to exhaustion. If you have a trained spotter, that’s not a problem. Lifting to failure is one of the quickest ways to add muscle size (hypertrophy). However, people have died by getting pinned under a heavy barbell in the bench press.

Bad technique in any movement can cause injury. But during a squatting or pulling movement (examples: back squat, deadlift, and clean), the spine and pelvis are put at risk. Shoulder and knee injuries are horrible, but spinal injuries can affect everyday activities for the remainder of the athlete’s life. Are we really willing to put our youth at risk of a major injury due to lack of funds? If that’s the case, I recommend not offering weight training at all in schools. I want my children to understand history as much as any parent, but I’d rather their history knowledge take a bit of a hit versus risking their lives or their long-term health.

There’s something else school boards and the powers that be are forgetting.

“There is substantial evidence that physical activity can help improve academic achievement, including grades and standardized test scores.” (U.S. Department of Health and Human Services, “The Association Between School-Based Physical Activity, Including Physical Education, and Academic Performance”). Here’s a link to a report about the combined studies on this subject.

If the priority were academic performance and safety, all the data would point towards an effort to improve the circumstances within our high schools and middle schools. I’m not going to sit here and write about all the problems within our schools. That’s not who I am. I get it! There are some major challenges, and I agree if there isn’t any money, you can’t pull dollars out of the air. 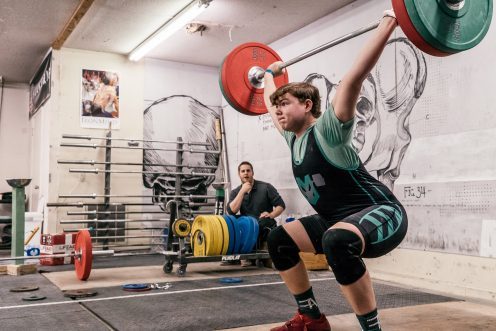 Here are my suggestions:

First, let’s standardize the performance of movements. I know that there are several techniques for movements such as cleans, squats, benches, and deadlifts – and I am not trying to make coaches teach a certain way. However, there can be standards set that all experts would agree on. For example:

Once you’ve standardized the movements, all coaches should take a course and pass a test. That way all coaches in a high school setting will at least have seen proper movement patterns. Then they can be held liable if they choose to deviate from the standards. The video within my tweet that went viral wouldn’t have passed any of these standards.

The next step is to standardize programming protocols. There are a lot of amazing experts out there who would love to come together on producing these protocols (such as Coach Joe Kenn, Kelly Starrett, Andy Galpin, and Coach Sean Waxman). A four person team like this would rock because you have two-time NSCA Coach of the Year Joe Kenn, DPT Kelly Starrett coming at things from a functional movement approach, Doctor Andy Galpin who heads up a lot of the latest research in the industry, and Coach Sean Waxman who is one of the best weightlifting coaches in the country. When these dynamics come together, something beautiful is formed. I just want to avoid things like 10 x 10 at 70% in the clean. This could help avoid crazy workouts that some coach thought of on New Year’s Eve that puts 5 athletes in the ER due to rhabdomyolysis.

A group like this could even develop basic plans that an inexperienced coach could follow. In middle school and high school, basics work the best anyways. Standardized movements and programming leads me to my next suggestion.

Six of the Greatest Minds in Strength & Conditioning in One Book 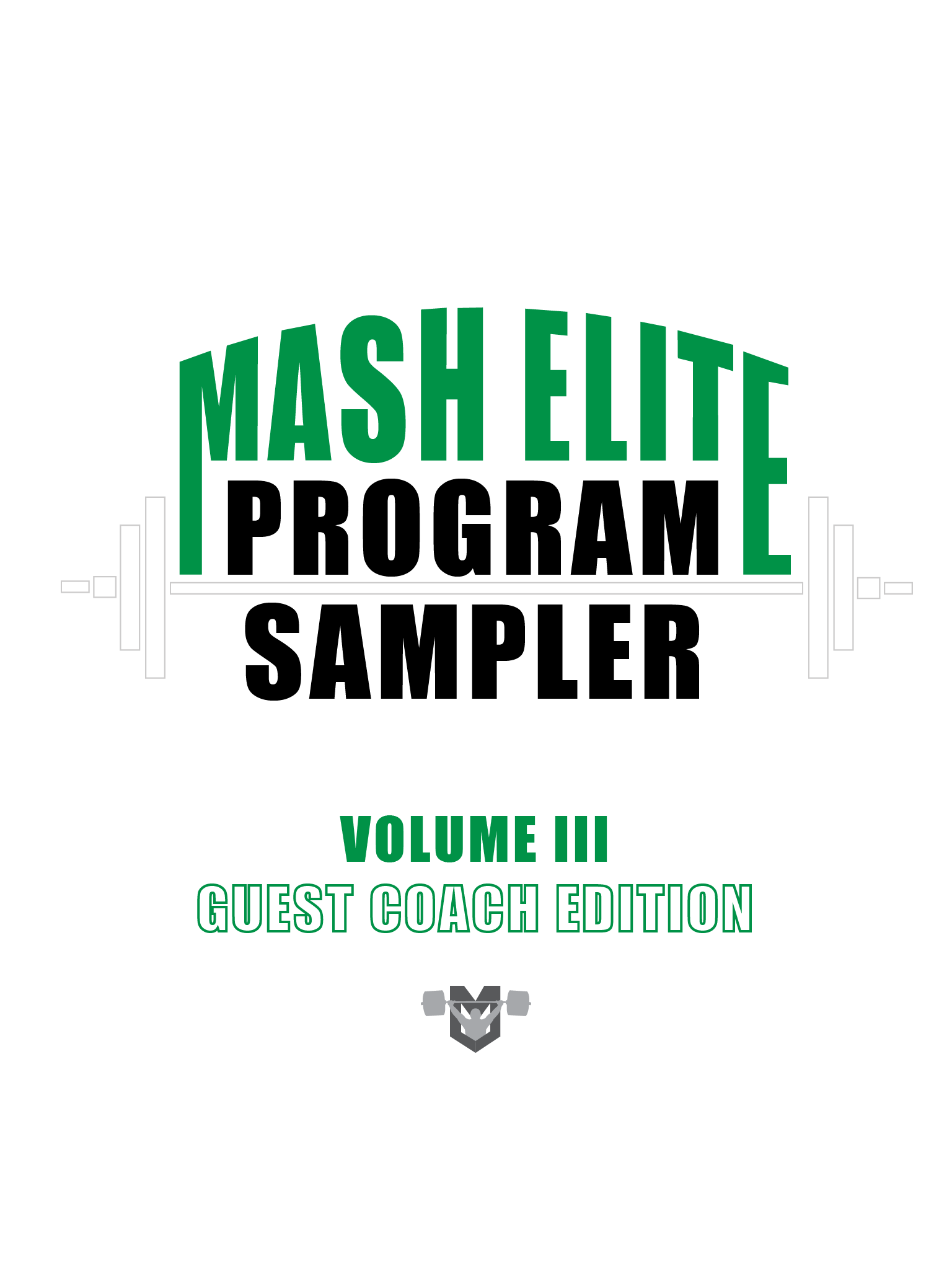 Some of the greatest coaches in the industry have collaborated with the Mash Mafia to bring you a sampler of programs that packs a punch. Take a peek inside the minds of these experts so that you can take your knowledge and performance to a new level.

If we have standardized movements and standardized programming, now we are set to prepare all coaches. If we can’t afford to hire certified and experienced strength and conditioning coaches, the next best thing is to prepare the coaches that we have.

I’d like to see a solid curriculum developed that would teach these coaches the movement standards and the programming protocols. The curriculum should also contain the basics of biomechanics, anatomy, and physiology. There should be a testing procedure proving the coach’s proficiency. After that, I recommend one more thing – which brings me to my next point.

I am a good coach because of my network. I’ve learned from amazing coaches: Coach Joe Kenn, Coach Sean Waxman, Louie Simmons, Coach Don McCauley, and Coach Dragomir Cioroslan to name a few. My time spent with these coaches helped to mold me into the coach I am today. If we could provide these coaches with a mentor to answer questions and give suggestions, we could be assured that coaches wouldn’t slip back into their old ways. Mentors would be for accountability as well as continued growth.

Who becomes a mentor? I am sure that several of you are asking that very question. The first thing to do is find a group of amazing coaches to form a board. An example of a high-powered board would be people my suggestions above: Coach Joe Kenn, Kelly Starrett, Andy Galpin, and Coach Sean Waxman. This board could develop the standardized movements and programming protocols, as well as give their seal of approval for potential mentors. Even if mentors required a monthly fee like $350-500 per month, that’s still a lot cheaper than hiring a strength coach for $40,000 per year.

If we could keep the other suggestions and top it all off with a clinic, I think that we could be assured the conditions within high school weight rooms would at least improve. Just like USA Weightlifting’s Level I Certification, we could recruit proven and experienced coaches to teach other coaches based on the developed standards. Personally I like the USA Weightlifting Level I because it teaches the progressions of the competition lifts as well as the main accessory movements. That also guarantees a qualified coach gets to witness the competency of the potential coach’s ability to teach the movements.

The USAW Level I also teaches the basics of programming and gives examples of well thought-out programming. We could start by requiring the USA Weightlifting Level I. I like that curriculum over the NSCA CSCS simply because of the practicality of the certification. The potential coaches are actually taught to teach the lifts, and they have to demonstrate their competency in teaching the movements. The CSCS does an incredible job of teaching the science, but the USAW Level I is more practical. To solve the problem in our schools, we need the practical.

Personally, I would like to see USA Weightlifting get together with the National High School Strength Coaches Association, make a few tweaks to the USAW Level I to make it more strength and conditioning based, and then boom you would have a perfect certification for high school strength coaches. Let’s just get started! I just want to see change taking place.

However, I know that schools are strapped for cash. I know that our teachers are underpaid. I care more about academics than sports in my own family, so I get it. I hope these suggestions will help spark some real change that doesn’t cost an arm and a leg. I think these suggestions could be implemented quickly.

Now if some of you don’t like these ideas or have better ones, I want to hear them. If this article simply gets people talking, then it has done its job. Let’s start the discussion, ladies and gentlemen. Let’s teach our kids to be strong, but let’s keep them safe.

Strength and Conditioning Greatness with Reb Brock – The Barbell Life 389