Unafraid to Jump? The Question of Greatness!

Join the Eat & Lift What You Want Team 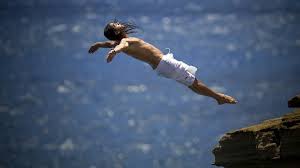 I am on a plane as usual leaving the amazing Barbell Business Mastermind. This week of learning and networking attracted some of the heaviest hitters in the Fitness Industry. This article isn’t to name drop. I simply want to point out a single trait that I found we all had in common. I also want to show how high impact athletes, and other people that will shape our society in the coming years share this trait.

The one common trait is “Fearlessness to take a Risk”! There were over twenty people in the group this week, and every last one of us falls into this category. The fact that we were even there shows our ability to take a risk. $3,500 plus airfare might seem like a lot to some people, but to this group it was a drop in the bucket. All of us realized that the benefits would far outweigh the risks. The majority of us agreed that we had gotten our money’s worth half way through the first day. 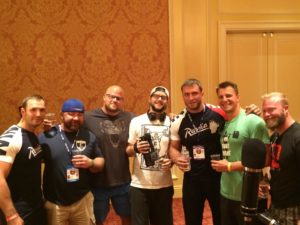 I told the group about a story that took place during my bachelor party. My wife knew my tendency to cliff dive off of remote cliffs, bridges, and dams, so she requested that this one activity be avoided. I truly had every intention of submitting to her wish, but as the night progressed so did my inhibitions.

All of my friends are athletes, and high impact people. This can sometimes lead to some craziness, and that is exactly what happened. We were in my old college town of Boone, NC. About 1am that night, my desire for a little trouble got the best of me. My best friend KJ could see that twinkle in my eye, so he thought it would be best for the rest of the world if my appetite for trouble was filled with some good old fashioned late night diving.

We chose one of our favorite places in Boone to quench our thirst of danger. We took the entire group of ten men out to Hound Ears Dam. There are two options to choose from: a 40 ft. jump and a 70 ft. jump. We of course chose the highest. Now of the group, only two of us made the trek out to the spot. KJ, my best friend, and I walked the plank out to the dreaded spot.

Crawling out to the spot, yes crawling, was the scariest part. Remember it is pitch black at 1am, and we are talking about a massive fall if you take the wrong step. We finally made out to launching pad, gathered our balance, and stood up. We could hear the rushing water, but the water itself was blacked out by the late night skies of the Blue Ridge Mountains. It was any man’s guess as to what awaited us at the bottom. Also we are talking about early June in the mountains, so the water was certain to be ice cold.

It was time to put up or shut up! I looked at KJ, and asked him if we were really going to do this. The fact that I had even asked that question infuriated me. I turned my back to the water, and back flipped into the pitch-black abyss. I had done that many times in the daylight, but the total darkness was a whole new animal. I became totally unaware of where my body was in space, and at that moment I knew what was to come.

Blaaammmm! I smack the water on the rear of my left shoulder, which totally knocked every ounce of air out of my lungs. At that moment, I found myself in pitch black, ice-cold water with no idea of where “up” really was. I simply allowed my body to float upwards until reaching the surface. Now the journey to dry land began. The swim was probably 100m, but it seemed like a mile. I wasn’t able to breath at all until I finally drug myself out of the water.

During my honeymoon in Key West, my wife rolled onto my shoulder, which caused me to cringe in pain. The fall had strained my shoulder. She asked me what was wrong with my shoulder. For a split second, I debated on making up a story, but decided a lie this early in the marriage was not the start that I had envisioned.

I told her the truth. She was not happy with her brand new husbands at all. However, she has come to know that this characteristic is a big part of whom I am. This ability to overcome fear and take a risk is what makes our business at Mash Elite Performance so successful. It is also the characteristic that allowed me to break World Records in Powerlifting.

AJ Roberts and I shared our thoughts with each other on this topic all weekend. When both of us started on the Powerlifting scene, we both set our sights on breaking world records. Most people can’t wrap their heads around this. While they are trying to beat their buddy in the gym, we are looking at the rankings on PowerliftingWatch to see the number that we need to be number one. A 1000lb Squat isn’t scary to us. It is an exciting adventure.

If you want to be a high impact entrepreneur or athlete, your mindset has to be one of greatness. You have to visualize greatness to actually achieve it. You will never set your eyes on climbing a 3,000ft mountain, and then accidentally climb Mt. Everest. To climb Mt. Everest, set your eyes on that peak and figure a way to the top with planning, execution, and putting a great team together. The same principles apply to business and sports.

Will you jump, or will you stand on the side and watch? That’s the question that you have to ask yourself! Surrounding yourself with a solid support staff will make that leap much easier.

Swimmers, Kids, and Assessment with Bryce Biel – The Barbell Life 346