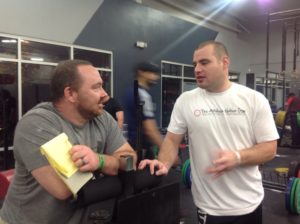 A lot of people have asked me to write about the experience of coaching the most popular weightlifter in America, Jon North. It took me a while to actually put my thoughts together because Jon is such a complex character. I say character because his whole persona is so animated all the time. The guys simply lives a reality show because he is so passionate about what he is doing. Most people try to sum Jon up with his abilities as a weightlifter and his wild bar slam celebrations, but that is only scratching the surface of this multi-dimensional athlete/businessman/husband/father. Today I will give you as much of the whole story as I have time.

I met Jon in February 2013. I visited Muscle Driver USA, and Jon was performing his last heavy day before the Arnold Classic. He made an easy 160/190, but more importantly he took the time to come up to me and my wife to say hi. He then invited us out to dinner and paid for the whole thing. Remember he had just met us. People in the weightlifting world have him all wrong. They peg him as the bad boy! They are mistaking passion for “bad”. Jon has an ever present sense of urgency to have the biggest impact on the world of weightlifting while he is on this earth. There is no mistaking that!

That passion and sense of urgency rings clear on his podcast, Weightlifting Talk. Shortly after meeting him, he invited me to be a guest on his show. I was super excited to have the chance to chat with him and Coach Pendlay on the show. We talked about over-training that day, and it was a real blast. Soon after that, he invited me to be on the show full-time. I of course agreed to the offer.

People often asked me why I chose to drive one hour each way two days per week to be on his podcast. The answer was easy! I was totally intrigued by his personality and the excitement that he was bringing to a sport that I had loved so long. While I was young, I often wondered why weightlifting was so quiet and reserved. The sport is exciting if people let it be exciting. Think about what is going on! An athlete is hurling a heavy barbell through the air, diving under it, catching it, and standing up all the while realizing the barbell is capable of killing them. It’s an amazing sport! I always thought that the athletes should be allowed to show their passion. Jon actually did it! 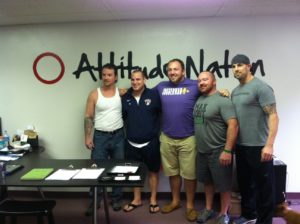 The thing that people miss is that Jon isn’t saying that everyone should slam the bar and go crazy. He is just saying that the athlete should be allowed to demonstrate their inner passions in any way that they see fit. If you want to follow the bar down, keep calm, and walk away slowly, then do so. He just wants everyone to respect each other even if they don’t do everything exactly the same. I totally agree! The sport needs people like Jon if it wants to keep growing. The new generation of athletes are coming from the CrossFit world, and they are wild and passionate. We will either catch this audience and advance our sport, or someone else will.

In January 2014, Jon asked me to be his coach. He was just coming off of a 6 month retirement, and he had a whole new fire lit. People always ask me, “Who is the most difficult athlete that I have ever coached?” Normally they are expecting me to say Jon North, but they are wrong. In the gym, he would do exactly what I said. He would give me feedback, and sometime we would make adjustments. That was simply a team decision that was better for him. The biggest struggle is that Jon is torn between multiple worlds: weightlifting, podcast, Attitude Nation, entrepreneur, and artist.

Here is what I mean by all of that. Yes he is one of the greatest American weightlifters. Yes he could focus on training solely and in my opinion, easily make the Olympic team, but that isn’t necessarily his goal. His goal is to have the biggest impact on the weightlifting world. No scratch that! His goal is to have the biggest impact on the world. I personally know at least ten Olympians, but not one of them has influenced the weightlifting world like Jon North. I am in no way being disrespectful. I am just being honest. That guy’s passion has opened the sport of weightlifting up to thousands of new people. When young people watch his videos, they see an athlete that they want to be. They see passion, drive, and creativity. The whole sport becomes something different after watching Jon play his violin, hoist the weight overhead, and slam the bar back to the floor victorious.

Of course as his coach, I wanted him to focus more on training because I knew that his potential was endless. However, as a coach I have always tried to be mindful that my goals for the athlete might be different than their own, and at the end of the day all that matters are the goals of the athlete. When I accepted that, I was a much better coach to Jon. I decided that I wanted to coach him in whatever direction that he wanted to go. Now I am not saying that he isn’t training for the Olympics right now. He probably is, but it will only happen if he believes that the Olympics will have the biggest impact on the Attitude Nation.

At the Arnold Classic this year, there was a big ordeal about his bar slamming. I am not going to get into all of that, but I want to use the event to make a point. He was told that if he slammed a bar, he would be kicked out of the competition. Now if his biggest goal was making the Olympics, he would of adhered to the request. However, his biggest goal is to make the sport fun and exciting for the people that coming up. He wants that new athletes to have a better situation than he ever had, so he slammed the bar and played his violin. A lot of other coaches gave me a real hard time over this, but they didn’t know my intentions.

I am a coach to my athletes, first and foremost. I am a USAW Coach second. If my athlete wants to make a personal statement more than they want to make an international team, well I am going down with them. There is more to the whole thing. There’s an episode on Weightlifting Talk where we discuss the whole thing.

I could write a book about the two years that I have known Jon North. I feel like he taught me as much as I taught him. While coaching him, I got to learn first hand from him and his wife, Jessica all about the Cal Strength era. Traveling with them was like reading the best novel of your life. I would ask question after question, and they would tell story after story. Jon is a man with dreams, and a vision of carrying out those dreams. Sometimes those dreams take him multiple directions, and that can frustrate certain people. The key to loving Jon is accepting him for who is his a weightlifter, a creator, an artist, an actor, and a visionary. It’s who he is, and he will use all of it to do great things in his life. I do believe that I will write this book within the year because I have so much to teach from my time as Jon North’s coach and friend.

Don’t miss the Mash Mafia Dec. 20th Weightlifting Competition! Come celebrate the holidays at the Mash Compound with some bar slams and coffee! Click on the link below for information:

Also check out the first Learn 2 Lift of the Year right here at the Mash Compound January 10th and 11th. Weightlifting and Powerlifting taught by Coach Mash and the Mash Crew! Click below for more information: 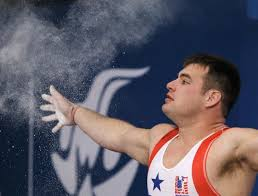