Yesterday we recorded the 100th episode of The Barbell Life. It’s hard to believe. The last few years have flown by. I guess that’s what happens when you are having fun. I wanted to make the 100th episode very special, so I invited some special guests.

I had my man Nate Hemphill, owner of CrossFit Broken Chains because he listened to me during my early years as a podcaster as the co-host of Weightlifting Talk. We quickly became friends during one of his visits to North Carolina, and most importantly we are brothers in Christ. He has listened to my show since the very beginning, so nobody has watched me grow as a coach, entrepreneur, and family man more than Nate.

I also invited some of my athletes Dylan Cooper, Tom Summa, Nathan Damron, and Malcolm Moses-Hampton. These guys have been with me for a long-time, and they were there at a very important part of my life. Last year around this very time, I left Team MuscleDriver USA. 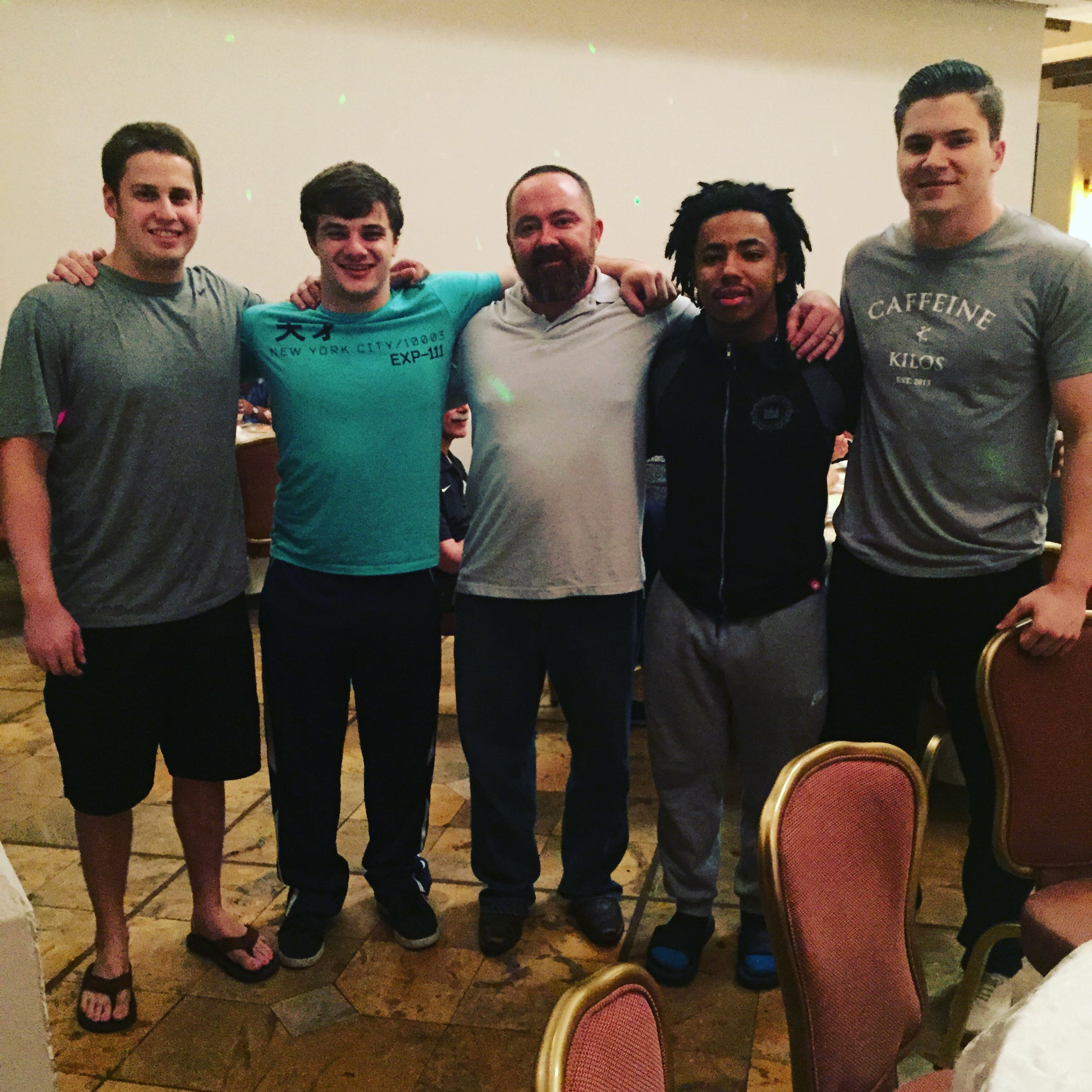 Leaving Team MDUSA was a scary time for me. I had pretty much let my own gym decrease in numbers, so that I could coach with Team MDUSA. I saw it as a great opportunity to coach the only professional team in America and to learn from the other amazing coaches on the team.

Leaving MDUSA meant that I was leaving a salary, and being a part of the team helped me grow my business online. When I left, I was on my own. All of that made me step up and work harder than I have ever worked before. I became a better coach both onsite and online, and I worked harder to provide the most free content possible. I believe in a very circular world. I just focus on the number of people that I can impact. Normally the growth of my business is directly related to that number, so I just let it happen.

Now let’s get to the point of the blog. Since I had my boys on the show, I wanted to use their programming to teach the listeners about individualized programming. Now all of these guys are international level competitors, but you can apply the information to anyone. Let’s look at them one athlete at a time.

1. Nathan Damron: Nathan is basically a strength machine. His legs are pound for pound stronger than most weightlifters in the country. He’s been lifting for seven years, and he has done a great job with his technique.

He can clean & jerk about 68% of his best Back Squat. A lot of coaches would think that makes him an inefficient lifter, but I disagree. All lifters are going to establish their own ratios between their strength numbers and the Olympic lifts. Nathan has short femurs and a strong core. He is designed to be a squat machine. His snatch and clean techniques are beautiful. When his back squat goes up, so does his snatch and clean. That 68% number will probably stay the same his entire career. It’s just the way that he’s designed. It has nothing to do with technique.

How do we design a program for a bull like Nathan? First we spend the first several weeks squatting, pulling, and pressing to get his general strength up even more. This phase has so far led to greater numbers in the snatch and clean & jerk each cycle. When we drop the strength volume, Nathan will handle heavier loads than anyone on my team. Because his snatch and clean & jerk are a lower percentage of his absolute strength, his body can handle higher percentages in the Olympic lifts on a more frequent basis. 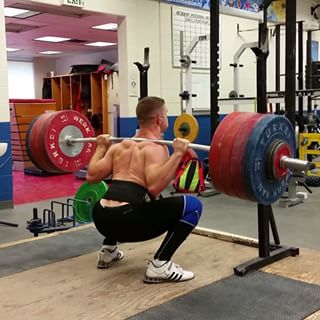 The only two weaknesses that I can see in his game are the jerk recovery and pulling power. Notice I didn’t say in his jerk. He has the ability to produce an amazing amount of force in his dip and drive. He normally catches any weight that he attempts. He just loses it during the recovery. We are going to add jerk recoveries, heavy lunges of several different variances, and stability work prescribed by the team physical therapist, John Davidson.

Nathan’s pull is quite a bit under his squat. The goal is for the pull and the squat to match. This might never happen for Nathan, but it is what we strive for. He has increased the strength of his clean deadlift, and that has equaled a more powerful pull.

2. Tom Summa- Tom has the most efficient snatch and clean & jerk on the team. For example, he can clean & jerk 85% of his best back squat. He’s been competing in the sport for over eight years now. There is one obvious focus for Tom, and that is general strength. I wrote a squat cycle for him called “The Hard Gainers Squat Cycle” that you can find in the Free Workout section of mashelite.com. So far in the first couple of weeks, we have only tested his front squat, and he has already made a 4 kilo improvement in that movement to 195k. That has already equaled a PR Snatch of 150k/330lb. 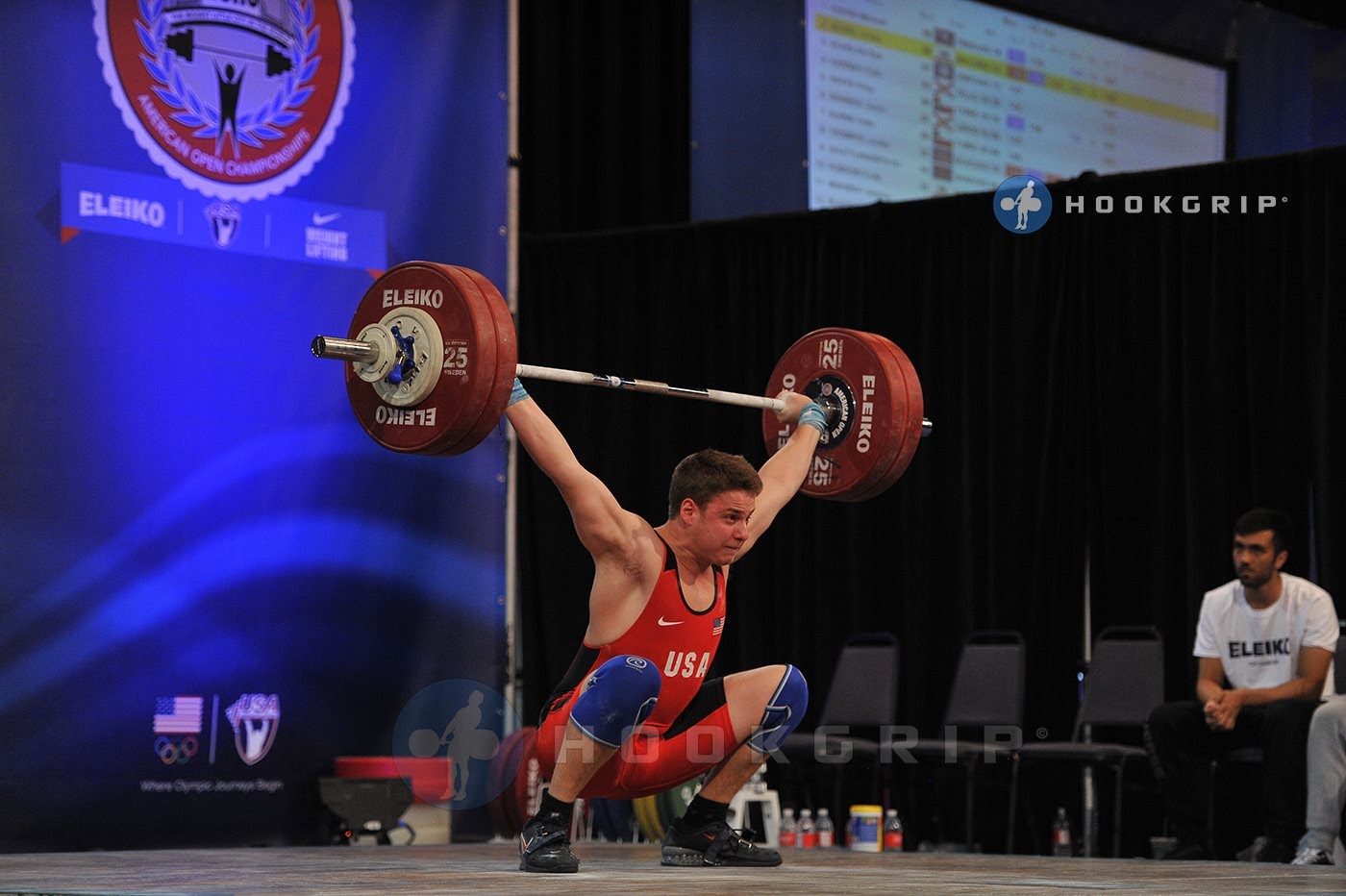 General strength will continue to be a focus of Tom’s programming longer than the other guys on the team. He’s a good puller, but we still focus on heavy pulls. There is something to say about the mental aspect of a heavy weight feeling lighter in an athlete’s hand during the initial pull. If it feels lighter coming off the floor, I believe the athlete has a better chance of making the weight from an increase in confidence.

3. Dylan Cooper- Dylan has only been at the sport for a little over three years, so technique is more of a concern for Dylan than Tom and Nathan. This will probably remain true for 2-3 more years, and then he will start to master the movements. 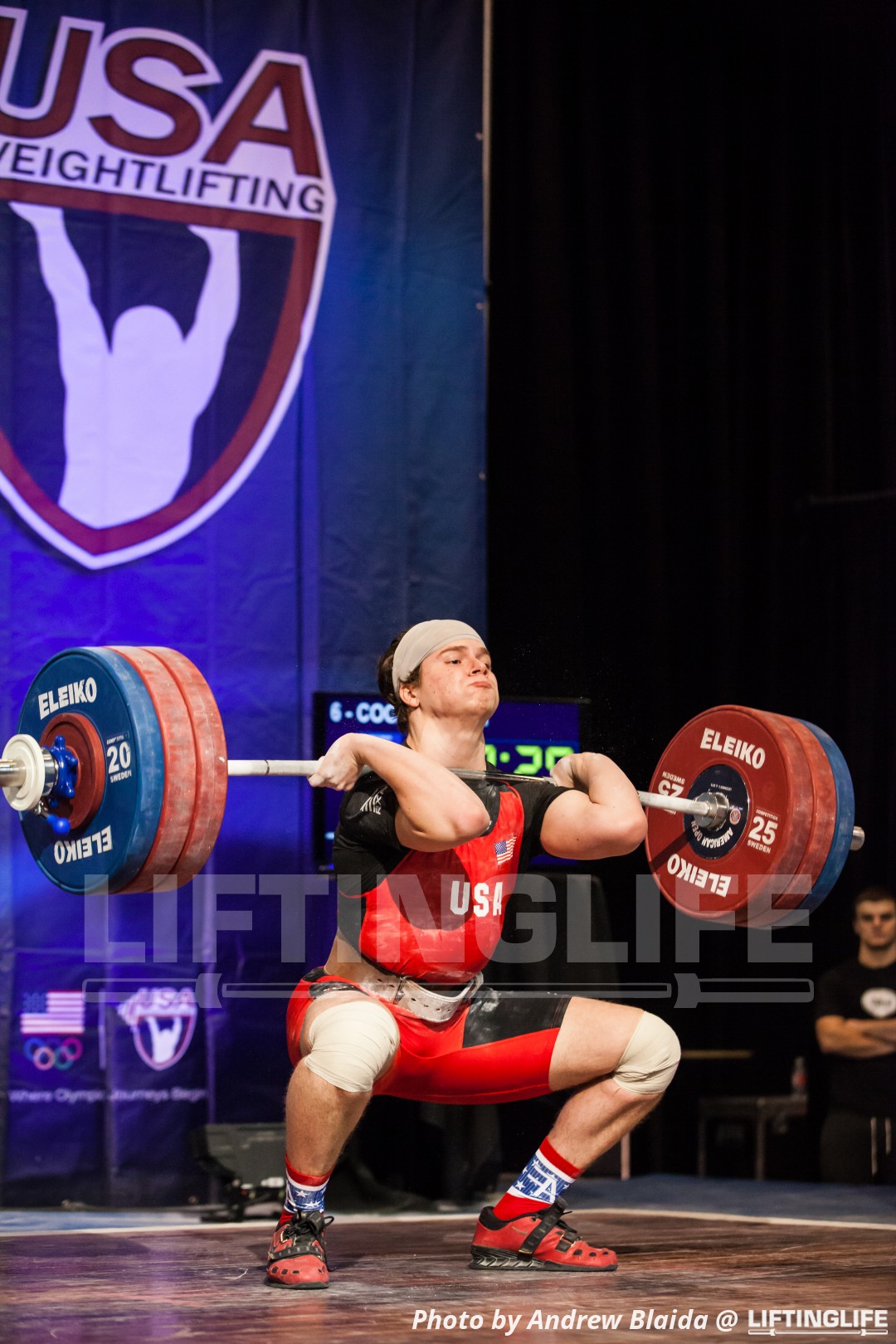 A couple of things that we are going to add are heavy carries and direct trunk stabilizing work. The one big weakness that Dylan has is maintaining a strong torso during the dip and drive of the jerk. Our goal is to stabilize the torso with carries, jerk dip squats, and special exercises prescribed by the team PT.

4. Malcolm Moses-Hampton- Malcolm is an extraordinary powerlifter. He is also in his third year of Medical School, so time is a major consideration. We have successfully used the squat every day plan to increase his squat and deadlift over 125+ pounds in less than a year. His bench has gone up about 100lb in less than a year. Now Malcolm was not a newbie, so these numbers are even more impressive. For example he was deadlifting in the mid-500s, and now he deadlifts 700lb. That’s a huge increase. 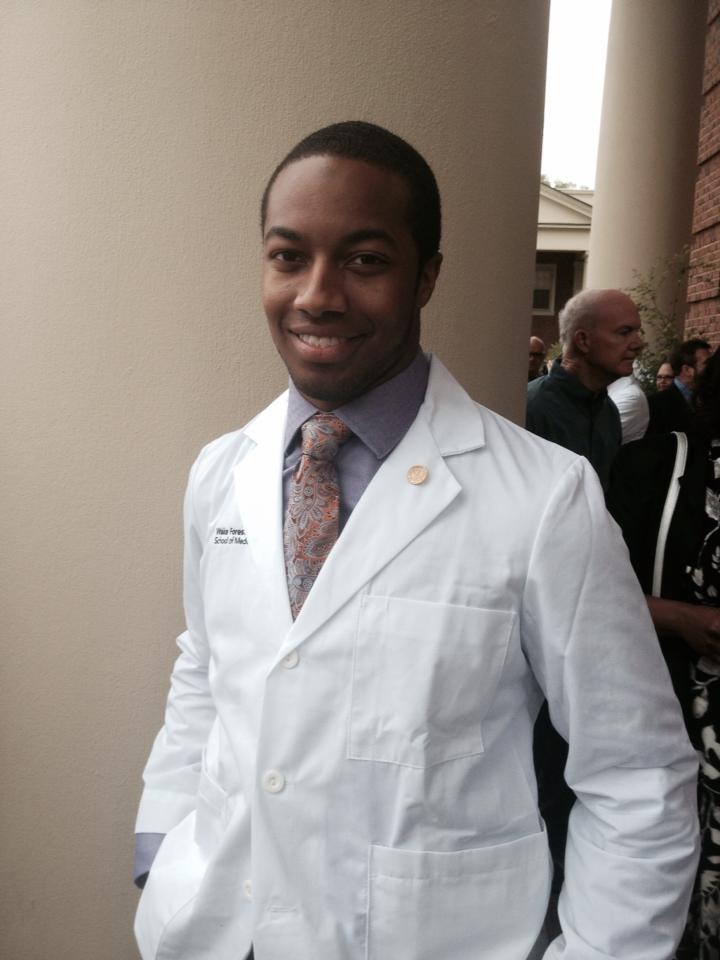 The squat every day plan worked the best because he needed to master the movements. Malcolm is a physical specimen. He is strong like a bull, so he just needed to focus on improving the efficiency of his movements. It worked.

Now he is planning on taking a run at Bobsled. I think that he is going to do exceptionally well. We have him doing more speed work of course, and now he is working of the clean for the obvious power production. I look for him to excel in the sport.

I hope this blog is helpful for all of you coaches and athletes. Here we have four different athletes and four different workouts. This can make practice challenging, but at that end of the day, this is better for the athletes. Now having a team plan can work effectively too if you are able to make small deviations within the plan during practice. Also if you are running a CrossFit class, a general plan works well.

However, if you are working with elite athletes or athletes that want to be elite, then you need to program based on the athlete’s individual strengths and weaknesses. A lot of times it doesn’t have to be huge deviations. If you don’t make those changes, your athletes and your team will suffer in the end.

Team Mash Elite is off and running. Our goal to improve the sport of Olympic weightlifting is having progress already. However we still need your help in making our dream a reality. We are also very excited to watch our ‘youth at risk’ program scatter throughout America and the world. Here is a full report of the progress: “Team Mash Elite Update”

Here are the ways that you can help with this dream:

1. Become an affiliate– Our first affiliate ever was Undisputed Strength and Conditioning in Minneapolis, MN. Vinh, Jason, and the team up there is an extension of our team in North Carolina. They coach with us at National meets, and their athletes are a part of our National Teams. We are one big family. For more details about becoming an affiliate email affiliates@mashelite.com

2. Become a Partner– for more information about that email me personally Travis.Mash@mashelite.com

3. Donate to the Team– thousands of you guys and gals read these article every day. If all of you donated $1-2 we would be in a much better situation. Click on the link below to donate:

4. Come to the 3-day Mash Camp July 8th thru the 10th click the link below to find out more:

5. Volunteer with fundraising, administration, or simply prayers. If you want to help, email us at:

We have big goals. We get it. We will definitely need all the help that we can get. This thing is bigger than three coaches. We need a team. A massive team! We are going to either do this once and for all, or stop talking about why America is terrible on the international scene. This is a chance for all of us to have a part in this.