Will You Jump Off The Cliff? 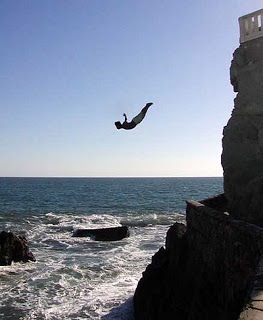 Today on Weightlifting Talk (http://www.spreaker.com/user/weightlifting_talk/boombastic) a question was asked about what it takes to be a world champion. I have talked about this subject a lot, but today I answered the question a little differently. I told the Nation a story about my Bachelor Party in Boone, NC, and right away I knew that I had explained the will of a world champion. Weeks before my wedding and bachelor party my now wife Emily Drew told me that I could do anything other than jump off anything into water. She was more concerned with my life than any other thing that could possibly happen. I tried to obey her wishes, but there is something inside of me that will still show its ugly face at times. A Darkness! A place that others just simply won’t go! I grew up with this unexplainable side of me! A chip on my shoulder! A desire to prove to the world that I was different.

Late the night of my bachelor party I was starting to get that feeling of one more crazy episode of all out madness. I actually started yelling at a guy for beating my Best Man Kevin Jones in a game of pool. Well him and Ox knew me well enough to get me out of the pub, so it was Kevin’s idea to go to one of our childhood spots, Houndear’s Dam. It’s a 30 ft high dam that hoovers above a cold Boone, NC lake. By the time that we got to the spot it was 3 am, and I decided to back flip off the thing. Kevin and I were the only two out of the group of twelve that were crazy enough to jump. It was insane, but is it a coincidence that Kevin owns his own corporation, and I’m a world champion that owns my own corporation?

During my jump I over rotated and fell on my shoulder. I dang near drowned, but I managed to survive. One night while on my honeymoon Drew rolled over on my shoulder, and I screamed in all out agony. I had to be honest, so I told her what happened. She was furious with me! I then asked her a series of questions. Did you fall in love with me the athlete? Did you fall in love with me the world champion? She answered yes, and I answered that she had fell in love with the guy that jumps off a Dam when no one else will! The guy that does what others won’t!

Will You Jump Off The Dam?

Don’t lie to yourself! Be honest! It’s ok whatever the answer, just know that I am that guy!

If you want to learn more about being a champion, email me at: