To Impress or To Inspire

Gunnar Anderson is one of my first clients. His mother brought him to me for shoulder rehab, and then one thing led to another. Now I would go to him for supplement information. Gunnar simply fell in love with the lifestyle, and now he is out of college and “living the code”. I am honored to post his articles, and work with him closer in the future. It is the coolest experience to watch these young men and women grow up into extraordinary individuals.

Below is a side-by-side comparison of a picture that Gunnar drew during high school of what he wanted to look like, and a picture of him today. Pretty crazy! 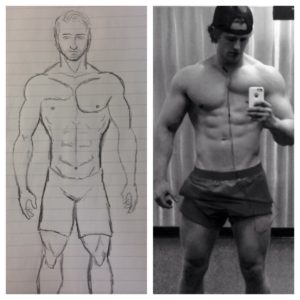 To Impress of To Inspire

Whether you’re a powerlifter, a bodybuilder, a crossfitter, or swimsuit model, sometimes it’s hard to admit why you do what you do. Is it to be in shape? Is it to better yourself? Is it to continually challenge yourself? Is it simply to look good? All of these are valid reasons for living the lifestyle that we do. However, chances are that your reason for living in the world of fitness, whatever it may be, is selfish.

We are an elite group of individuals and we know it. It was predicted in 2012 that by 2015, 75% of Americans would be overweight and we are well on our way to reaching that prediction. However, gym memberships are at record highs. Even with tons of people flocking to their local gyms to try to join the latest wave of “fitmania,” we still stand out like sore thumbs. There is one simple reason for this. For us, this isn’t a trend or a fad. This is how we choose to live our lives. It has become a part of who we are. It defines us.

Why? Why do we strive for these goals? Why do we spend hours in the gym literally torturing our muscles and pushing ourselves to our physical and metal limits? Why do we eat a plate of grilled chicken and veggies when a Big Mac would be easier and faster? If you really stop and think about it, it’s pretty selfish.

When I began lifting it was all about being big. I was born missing my right pectoral major (see The One Pec Wonder article), so for me, everything was about compensation. I wanted to be the strongest and the biggest. I set personal goals for myself and I reached each one of them. My peers looked to me for fitness advice and they looked up to me as a role model. But I wasn’t doing this for them, it was all for me.

Of course when you start it has to be all about you. If you’re doing this for someone else your heart won’t be in it and you will undoubtedly fail, no matter what your goal. In order to get in the mindset of reaching goals and surpassing them, you must be thinking about doing it for yourself. But let me ask you again, why?

About sixteen weeks ago I started an Instagram account called @theonepecwonder. The sole purpose of this account was to expose my weakest point (the missing pec muscle) and get over the fear of being asked why I was built the way I was. Within a matter of weeks I was getting emails from kids all over the world who had the same problem as I, some of whom barely spoke English well enough to craft the letter. Each email was different, but the message was generally the same thing; I had inspired them.

It was humbling and it was surprising. Something I had started for the purpose of forcing myself to get over a personal weakness had inspired tons of people. Some people had the same or similar conditions, some people had perfectly normal physiques. The people who had normal physiques emailed me to say that I had ruined their excuses as to why they weren’t in the best shape they could be in and were going to make drastic lifestyle changes. Others emailed me to learn how I trained one side versus the other. Tons of emails, all of which I answered as promptly as possible.

When I started the page I had not considered the possibility that I would reach the number of people that I have. I had not considered the possibility that I had the power to inspire others with my physique and work ethic. It is mind blowing and almost tear jerking to read some of the responses I have gotten. Overwhelmingly positive comments and praises that I never would have thought to ask for. When I look back to my early days of training, I remember staring in the mirror feeling hopeless. I remember feeling sure that no matter how hard I worked I would never achieve the physique I wanted. Had I seen someone out there with the physique I wanted that had the same condition, I would have gotten a fire under me that could’ve never been quenched. But there was no one doing it. Thankfully the desire to achieve the physique became more powerful than I could have imagined and the fire grew without the inspiration of another like me. I was able to inspire myself. But now, being the one that I would have looked up to as a young lifter, I see the value of inspiring others.

My workouts have become harder. My nutrition has become nearly perfected. My results are far and away the best they’ve ever been. In the coming months I will be able to do what I’ve always wanted to do. I will compete. The drive that comes from being able to inspire others is far more powerful than any personal motivation you can find within yourself. I don’t want to show off. I don’t want to show the world what I can do. I want to reach that teenager who isn’t perfectly happy with their physique and show him that he can work towards one that he will be proud of. I want to show him that with hard work he can achieve the goals that he feels are out of reach. I don’t want to impress him. I want to inspire him. 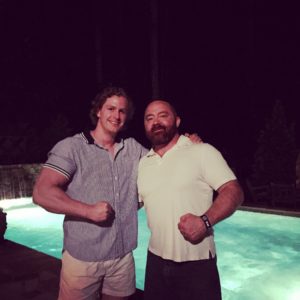