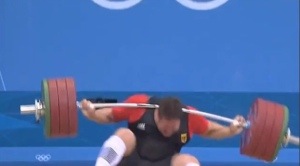 The strength sports, Weightlifting, Powerlifting, Strongman, Highland Games, and even Throwing, are filled with scary moments and struggles. I have competed in two of these primarily at a very high level, Weightlifting and Powerlifting. I have experienced and witnesses some major trials, and some very scary moments. With today being Halloween, I thought it appropriate to share some of these moments.

I spent most of my competitive career in the sport of powerlifting. My best lifts in competition were a 970lb Squat, 722lb Bench, and a 804lb Deadlift. At this level, it’s only a matter of time before things go wrong. My scariest moment happened at the 2004 WPO World Championships. I had 930lbs on my back in the Squat. On the way down, I felt a rip! I thought it was part of my singlet, but I was wrong! When I reached the bottom, and started the ascent, I realized that I had ripped my quadriceps. The scariest part was filling trapped with that massive amount of weight on my back. Thankfully the spotters were on their game, and they were able to help me. It only took seconds to get me up, but it felt like being buried alive for an eternity under a massive boulder.

One of the scariest moments that I witnessed was at the same event. Julie Scanlon, one of the strongest 165lb women of all-time, was competing. She was attempting 400+ lbs in the bench press, and I believe it was the heaviest bench ever at that Bodyweight. She actually finished the bench, and she received the rack command. Then lightning struck! A thunderous CRAACCKK was heard throughout the auditorium! It was Julie’s Ulna and Radius bones breaking in half at the wrist! My whole body cringed in nauseated disbelief at what I had just witnessed.

The strength sports that we all love so much are filled with moments like these. The road to success in any of these sports are paved with many injuries, trials, shortcomings, and hard work. We all seek to dominate sports that most don’t know about or understand! My road to winning the world championships was no different. I had injuries, close defeats, financial struggles, and shortcomings! These are the times that I remember the most. If it were easy, I wouldn’t have wanted it. We all love this sport for these reasons because we are willing to risk it all! We are willing to endure back pain! We are willing to overcome injuries and persevere! Heck we might die! We are Iron Warriors, and unless you’ve been there, you will never know what I’m talking about.

For information about seminars or online coaching, go to: