Off the platform: Travis Mash 2013 by Sam Holmes

My friend Sam Holmes is a Mash Mafia Weightlifter, but he is so much more. Sam is a part of Mash! Sam and I have a goal of opening a nonprofit center for kids in need. A place they can learn about working out, but more importantly where they learn about “Life”. We all know how much one can learn from the Barbell, and we want to share that and Christ with young kids that need to hear about the message of “Hope”. If you are interested in partnering, email me at: Travis.Mash@MashElitePerformance.com.

Sam wrote a heart warming blog about the incredible year that we’ve experienced at Mash Elite Athletic Performance, Smashed CrossFit, and Mash Mafia Weightlifting and Powerlifting. There should be a lot to learn about the power of simply meeting and getting to know people. My biggest gift is that I love people and their stories. Sam gives us a look at what went on this year. He has given me the honor of ousting it, so here it is:

Off the platform: Travis Mash 2013

I’ve had the privilege of witnessing a lot of cool things in 2013. One of the most awesome things has been seeing my good friend Travis Mash have one of the best years of his career.

The truth is, Travis Mash is a great man. Anyone who’s close to Travis knows this. But now people all over the country, even internationally, are beginning to discover how great he is.

In February, on a trip to a Perform Better seminar in Charlotte, Travis took a few of us Muscle Driver USA to watch the weightlifting team’s last Max Out session before the Arnold. That night Travis officially met Jon North and the rest of the team. Jon took us all out to dinner, and I could tell something special was forming right before my eyes. Now would be an appropriate place to say, “And the rest is history.” But let’s see how this panned out.

Jon invited Travis to be a guest host on his podcast “Weightlifting Talk” shortly after, and then came to train at Mash Elite during his comeback from injury after the 2013 Arnold. The ball kept rolling and Travis became the co-host of Weightlifting Talk which is live twice a week to over 10 thousand listeners.

More and more opportunities began to present themselves as Travis grew his relationship with the black sheep of the Attitude Nation. Multiple people have contacted Travis about internships as a result of listening to the podcast. Travis began to help Jon with his level 2 seminars and now has people from all over the country reaching out to him to do seminars at their gym or box.

And while things off the platform were going well, Travis was also having an amazing year on the platform as well. At one point Travis was regularly snatching over 120k and clean and jerking over 150k. His phrase “I do what I want” was being lived out on a daily basis for sure, and a shirt with the slogan was made and sold out multiple times over. Athletes of the “Mash Mafia” began to make huge leaps in their development as a result of both Travis’ coaching as well as his performance in the gym.

We haven’t even delved into Travis’s coaching yet. He coached two athletes from scratch to making it onto a high level weightlifting team (one of which being team MDUSA).Throughout 2013 Travis has been recruited to help coach athletes at meets from qualifying meets to this years American Open. He helped coach one lifter to a medal in his first national meet. He was also invited to guest commentate the 94kg A session at the American Open. During his time at the American Open he met Mike Bledsoe from Barbell Shrugged podcast which led to the team coming to Mash Elite to film an episode of “Barbell Shrugged”.

What does all of is mean? What’s the point of me sharing my perspective on this? Well, it’s because I believe there is a principle behind why this happened. First of all, it was meant to be. But it also happened because Travis is who he is. His faith in Christ has changed his whole perspective on life. So because of his character development and focus on his faith, Travis is someone who people are drawn to. So it’s no wonder why these connections have developed into a great 2013. There’s no telling what I’ll be writing in 2014.

If you get a chance, check out Sam on Twitter @holmesstrong and read his blog HolmesStrong.wordpress.com.

Next year, Learn 2 Lift seminars are scheduled all over the US: Dunmore, PA, Jersey Shore, Miami, Charlotte, Winston-Salem, Orlando, Myrtle Beach, Albuquerque, San Antonio, and we are scheduling Rhode Island as we speak.

Great time hanging out with Christmas and Josh last night! 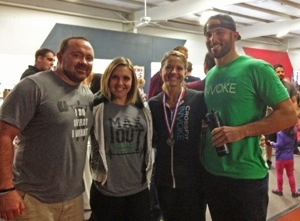 Swimmers, Kids, and Assessment with Bryce Biel – The Barbell Life 346