Mindset: A Paradigm Shift is Needed

Our latest E-Book “Performance Zone” has dropped! Check it out now at:

Mindset: A Paradigm Shift is Needed

I have coached thousands of athletes over the last twenty years. Dr. Andy Galpin even admitted that coaches like me are the ones doing the real case studies on real athletes. We get to analyze data on a daily basis from some of the best athletes on the planet down to just really good athletes.

Lately I have become more and more interested in mindset. Now I will preface this by saying that I am not a sports psychologist, but now we have our man Nathan Hansen on staff. Nathan received his first Masters in Behavioral Psychology and his second Masters in Clinical Counseling. He has opened my eyes to the endless possibilities with unlocking athlete’s hidden potential.

In my experience the first differentiator is of course genetics. There isn’t a lot that athletes can do about that. If you are 5’1” playing center in basketball, you aren’t going to a D1 college. I am sorry about that. We are all dealt different cards, and it is up to us to use those cards according to the genetic hand that we were dealt.

However this article is about another differentiator: an athlete’s paradigm or view of reality. This is where the rubber meets the road at the top end of the genetic curve. I have coached several amazing D1 and Olympic Hopeful athletes. I have often found that it isn’t the genetically most gifted that always make it to the top. Of course to get to the top genetics play a role, but it’s that athletes that truly believe that they can be the best that actually get there.

Let me settle one thing right now. Being cocky and arrogant isn’t the same thing as actually believing. A lot of times arrogance is just a mask for self-doubt and fear. I believe that this winning paradigm was formed at home and in the circle of friends that each athlete chose growing up. Of course some athletes are wired to be more naturally confident than others, but surroundings play a huge role in creating healthy paradigms.

Cade Carney is my freshman athlete at Wake Forest University. He started at running back as a true freshman. He went there with the intent that he was going to start and play well. He did just that. Here are some of the keys that I believe allowed him to do such an amazing job:

• His family openly discussed the moment of Cade entering college sports from an early age. They discussed what it would take to do well.
• Cade was prepared physically, mentally, and skill wise.
• Cade set clear goals from an early age conquering each of them.
• Cade chose his surroundings wisely.
• Proper mindset was established before day 1 of college.

I had the opportunity to be around Cade and his family multiple times while he was growing up. I watched Cade have conversations with his father about playing D1 since he was in 7th Grade. It wasn’t that they just talked about it. It was the way that they talked about it. It was the language that they used. They talked in future tense not in hypotheticals. In their minds it was inevitable. They were just planning on where he would go, and how well he would do. 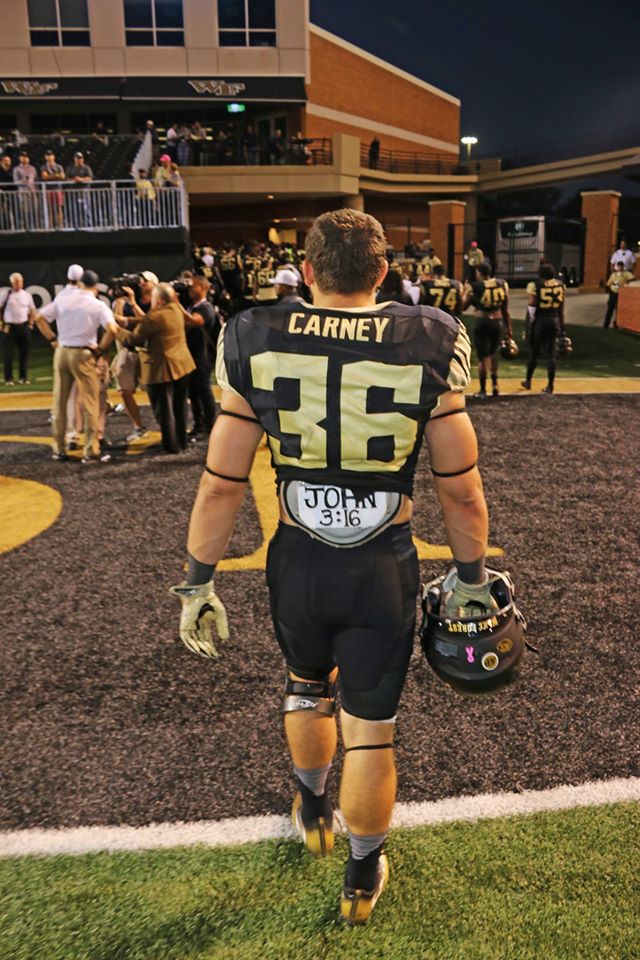 Being prepared physically, mentally, and skill wise allowed Cade to enter Wake Forest confident. If he had slacked off, doubt would have crept into the picture. Once doubt creeps in, it is very hard to get it out of your head. He was strong, confident, and prepared to play the game.

Cade set clear and concise goals from the time that I knew him. I had to work hard with most athletes on goal setting, but Cade was setting his own goals from an early age. I am not talking about goals like playing D1. Yes that was part of the process, but it was the smaller goals along the way that led him down the path like: perfecting sprint mechanics, proper squat technique, a 4.4 40-yard dash, etc.

Cade chose his surroundings wisely from an early age. This is an important one. If you want to derail any chances of success, hang out with the wrong people. People naturally love to drag successful people down to their level. It makes non-successful people feel better. Cade hung around positive people, and kept his eyes focused on the prize.

Cade and I talked about the proper mindset required for entering college. I am sure that he talked about this even more at home. We discussed rolling in day one with the goal of starting no matter who was chosen preseason on the depth chart. Most freshmen come into their first day a little intimidated for whatever reason. Maybe their coaches told them that redshirting was the best route. I don’t understand this mentality.

Once you tell an athlete that they will probably redshirt, that’s the mindset that they take on. They will start to accept that they aren’t going to play, and their performance will reflect that mindset. Maybe they will, but don’t just roll into day one accepting defeat. If you give it your all and still redshirt, that’s fine by all means. Then you go to work immediately determined to start the following year. I am just saying act as if you deserve to start from day one.

Your view of reality is nothing but a group of collected verbal baggage from your entire life. It’s up to you to keep the good baggage and dump the bad. It doesn’t matter if you dad told you that you can or can’t. It only matters what you believe. Start right now surrounding yourself with positive people. A paradigm is never truth. It is just a view of reality that can always be shifted up.

This is definitely my favorite book to have written. I hope that all of you enjoy reading it!