Recently, scientists such as Patrick Arnold, and athletes in the strength game (powerlifters, strongmen etc) have raised specific questions about Chinese Weightlifters. These individuals raising the questions know how anabolic steroids work, and what the short and long term effects steroids and PED’s have on a strength athlete’s appearance. One comment keeps popping up on forums, instagram and in general conversation. Chinese weightlifters don’t look like their steroids. In raising the issue, no one is saying for certain they are not using steroids. They lack the appearance of those who are using. The absence of acne, braces on the lower jaw in adult lifters, facial features and voice tones that haven’t changed in long time Champions such as Lu Xiaojun raise an even bigger question than possible steroid use. Are these lifters test tube athletes genetically engineered in a lab?

One can certainly speculate. How can China’s male and female weightlifters continue to dominate with only a few suspensions in the last decade? Since 2007 the U.S has had more lifters suspended than China. However, it’s not the first time these questions have been asked. Four decades ago at the Montreal Olympics, the appearance of East German female swimmers and their record breaking performances caused many to wonder whether they were simply using steroids or were these young swimmers genetically created in a lab? Were they selected through a process by coaches from a young age to only swim? We can rule out that they were not test tube babies since technology and science was not advanced enough in the early 1970’s. The first human baby to be born by in vitro fertilization was in July 1978. Not enough time to create champions by 1976. It’s clear now China is genetically modifying everything from dogs to frogs, pigs, monkeys and God knows what else. If China has used genetic modification or engineering to help create the current crop of champions, it certainly hasn’t been the first.

Instead of speculating on what China could be using or doing, let me shed some light on what China has been doing to create champions. In the early 1990’s China decided to invest large sums of money into weightlifting, along with gymnastics and swimming. Every year since 1991 China began testing one million prepubescent age children to begin sports training. Out of the one million children tested 100 were selected to develop as athletes in sports academies throughout all corners of the country. The Chinese government also hired a group of coaches to develop the best of the best from selected children. With one specific goal in mind, to dominate weightlifting, China began the arduous task of talent identification and developing talent at a pace no one has seen before or since. China has such a surplus of lifters capable of winning a World Championship, that they have sold or traded lifters to other countries, most notably 2 female World Champions in Kazakhstan. While the Soviet Union developed the basis for talent identification in children and young teens nearly 5 decades ago, China has 2 big advantages no other country has today: A populous dense country with over 1 Billion people from which to select the gifted, and Communism. 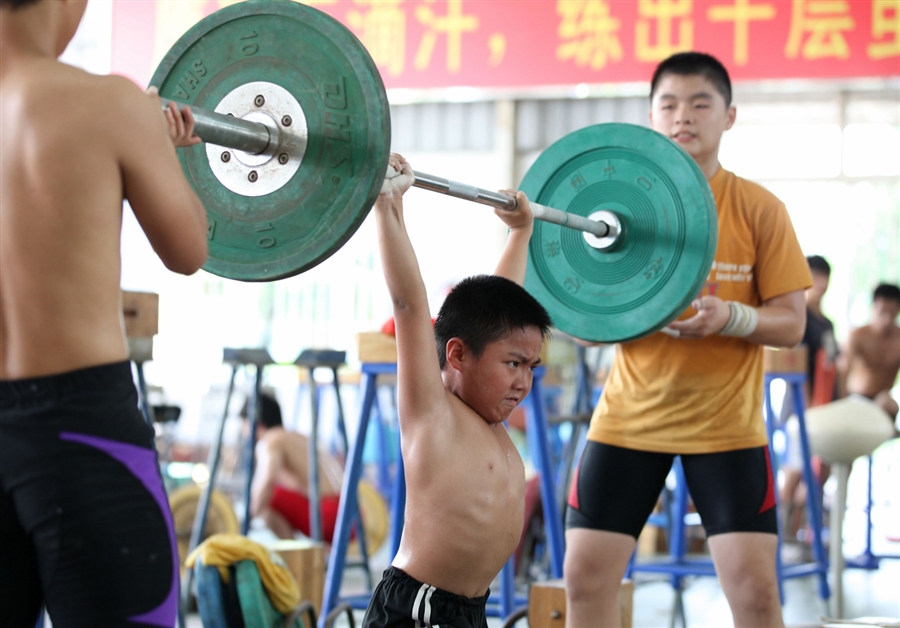 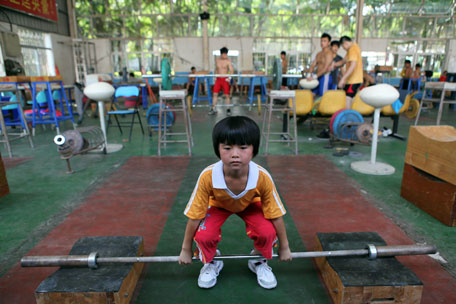 This picture taken on July 11, 2012 shows a young Chinese girl training at a weightlifting school in Xiamen, southeast China’s Fujian province. Dominant China put Asia on top of the world at the Beijing Olympics but the pressure is on as they bid to repeat the feat away from home. CHINA OUT AFP PHOTO

If you are one of the fortunate children selected to attend a sports academy in China, you go whether you want to or not. Training for weightlifting is not a passion, it’s a job. Andrew “Bud” Charniga, who has been to China many times told me in conversation, “They live like prisoners. They train, eat and sleep. No social media or personal freedom of any kind until you are a champion. Lifters must leave their dorm rooms open at all times for inspection and wake up calls.” It’s simple. You do your job and win, and then you’re rewarded. You don’t do your job, your replaced. Whether or not a lifters love weightlifting or hate it, they are dead serious about winning. Winning means freedom and a better life for your extended family. The motivation to succeed in a communist country is very different from democracies or constitutional monarchies. All one need to do is a quick YouTube search of children training in gymnastics to wonder if it’s borderline child abuse.

Children training in gymnastics. This may disturb some viewers.

Take for example the story of Chen Xiexia, the 48 kg World Champion in 2007, and Olympic Champion in 2008. Six weeks out from competing in Beijing she tore her quad an injury severe enough for coaches to select an alternate in her place. She said no. She continued to train as if nothing were wrong and lifted 95 kg in the Snatch and 117 kg in the Clean & Jerk to win Gold. This victory helped her move her family from Panyu City to Beijing. This meant her family moved from a small house with no running water and little electricity in Panyu City, to luxury housing of Chen and her family’s choosing.