I’m excited to introduce to you Mash Mafia Online Team Member, Grayson Corrales. She is taking the Weightlifting World by storm.

My journey to weightlifting has been a long and wayward one. I first became vaguely familiar with the barbell four years ago in a high school weights class, although my experience was limited to bench press and box squats up to, but never over, the 45 plates I bore with such pride. I was one of the few females who could claim that accomplishment, and I loved the sense of empowerment I felt due to my newfound strength. As a junior I lost touch with weights and fell victim to the mentality which many females share: that muscles aren’t feminine or attractive and the pinnacle of fitness is endurance. The year passed with increased discomfort with my own body, which wasn’t as easy to run away from as I’d hoped.

Senioritis crept in and I signed up for weight lifting with some friends in hopes of an easy A. The path of least resistance ended up being quite the opposite. There was a new weight lifting coach who would grow in to the best mentor I have ever had. The class periods were organized in to a 5-day bodybuilding split over the course of the week, and Scott always encouraged us to focus on power movements with heavy weights. I quickly fell back in love with strength training and pushed myself day in and day out in both the weight room and on the cross-country course.

As the fall season carried on, I grew less and less entertained by the monotonous running and more and more enchanted with the barbell. During one class period, Scott suggested I learn how to snatch and clean. I was dumbfounded and slightly offended but he explained the movements and I decided to entertain him. To this day I remember the confusion both my mind and body experienced on my first several attempts at a hang snatch with an empty barbell. It didn’t make sense. I didn’t want to do it. I wasn’t good at it. The clean was a similar awkward manipulation of untrained limbs at first but powers started to click.

I began coming in to early morning workouts 3 days a week to work with Scott on the power variations of both movements, with an emphasis on the clean because I much preferred it. Once I had finally run out cross-country season, I had the opportunity to come in after school and put in more work. The 45-minute early morning workouts accompanied by 30 minute in class bodybuilding did not satisfy my desire to improve my strength. Scott and I (and an occasional brave soul) would spend 1-2 hours on supplemental bodybuilding work, heavy squats, barbell lunges up and down the seeming endless hallway, cleans from boxes, farmer’s carries on the football field, and tire flips. It was never work to me. I loved going in every day, every session. I was sore- really sore- my body ached day in and out. There was no programming. There wasn’t much structure. There weren’t even necessarily goals all the time. It may not have been the most intelligent way to train, but then again I wasn’t really training. It was just Scott and I doing what we loved.

I noticed changes in my body but Scott was always there to encourage and support me. I liked being strong and I finally valued my body for its capabilities and not for its appearance. After about four months I found myself centering my lifting on the classics. I naturally gravitated towards more front squats, made sure I was fresh for my power movements, and worked on deadlifts to help my speed from the floor (I know better now).

At the beginning of spring my newfound friend and mentor suggested that I compete in bodybuilding in the figure division. I knew absolutely nothing about bodybuilding, but the same had previously applied to weightlifting so I decided to trust Scott’s judgment as he had led me in such a positive direction already. The summer months were spent doing the same workouts with added high intensity work and some steady state cardio along with meticulous meal prepping for my diet. 6 meals a day centered on the bodybuilding staples: chicken breast, broccoli, brown rice, egg whites, and oatmeal. A month in to my cut I hit a PR power clean of 84 kilos and was feeling great.

Soon afterward strength began to decrease, especially as college began and I was forced to juggle classes with 2-a-day cardio and meal prepping. I was determined to achieve my goal though. The exhaustion I felt after high volume bodybuilding workouts and a long day of school on only 1300 calories is absolutely unexplainable. After a 20 pound weight cut, I competed in 3 shows and placed in the top 3 at each. I did several photo shoots and I finally loved how I looked. But it wasn’t sustainable for me. I was incredibly weak. At that point I would have been lucky to clean 50 kilos as I had sustained a back injury, which never healed due to the caloric deprivation. I missed being strong but loved being on stage and winning. The decision was made to commit to bodybuilding and regretfully leave the possibility of weightlifting behind.

A couple of months of body part splits and hundreds of thousands of isolation reps passed and I was already burning out. I had exhausted my desire to pre-exhaust and I dearly missed lifting heavy but took joy in the few sets of cleans I was allowed per week by my bodybuilding coach. During one of these sets at the WSU rec I was approached by a weightlifter that was also a student. He expressed his belief that I had potential in the sport, and after a couple months I made the commitment to pursue the career of a strength athlete.

I tested maxes over winter break and hit a 61 kg snatch and an 80 kg clean and jerk. After 4 months of strength training with him and a coach I had achieved my aforementioned PRs. Looking back on the previous 4 years it was a wonder that I had the opportunity to meet such incredible people to positively influence me and lead me to where I currently was. I was happy with my accomplishments and excited for the next chapter of putting more weight on the bar and furthering my personal improvement.

My training after the competition never felt as good as it had before. I wasn’t getting as strong as I’d hoped and I began having disagreements with my coach. Working long days on the farm (sitting in a tractor) was also negatively affecting my speed, strength, and mobility. I became increasingly discouraged and with a month left of summer, to top it all off, I sustained a wrist injury from missing a clean. I felt hopeless and it felt as if I’d never be able to get back to where I once was.

At that point I decided if I was going to continue weightlifting I needed to try something different. I reached out to Travis via email and told him my numbers to which I received the reply: “I’m not sure what you want, son.” I corrected him and stated that I was a female lifter and after sorting out the details like the fact that I was speaking in kilos, not pounds, he agreed to coach me online. Since then I have made a successful recovery and am getting back to where I once was. I am looking forward to my future in weightlifting working with Mash Elite and cant wait to hit new PRs soon.

To find out more about joining the Mash Mafia Online Team, click on the link below: 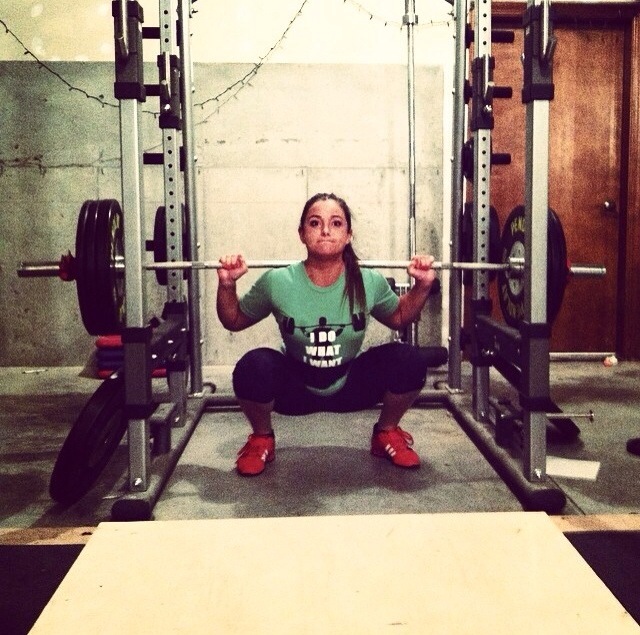