Check out one of our six E-Books:

This is a question that a lot of you have been asking: “How do I get psyched up for a PR attempt?” That’s a great question, and now with the help of our Psych Guy Nathan Hansen, I feel better giving all of you an answer. I will say that getting ready for a PR attempt is where a lot of you go wrong. Here’s why.

There is a lot that goes into working towards a personal record especially once you’ve been in the game a while. What I am about to say goes for any barbell personal record: snatch, clean & jerk, squat, bench, and deadlift. The key is all in the preparation.

This pattern helps to put the body on cruise control. If you start to change your pattern, your body perceives the attempt as a new activity. That can cause coordination and fiber recruitment to go haywire. I see it all the time in my own gym. Some people approach a personal record the same as any other lift, and they are the most successful. Others will change everything, and they are the least successful. Here’s an example of what not to do:

I have watched one particular athlete kill it during all preceding attempts leading up to a PR. They were keeping a pattern for setting up. Their mechanics were right on par for the course. Then they add a little weight, and everything changes. Their breathing increases. They cut the music up or down. They take longer to approach the bar. Then 100% of the time their mechanics change ending with a miss. That particular athlete has since changed that mindset quite a bit resulting in more made lifts.

Getting psyched up is an individual thing, but here’s something to consider. Some people will cause nervous energy when they get psyched up, and that leads to a lot of negatives. If your breathing changes and your heart starts to race, you might want to consider sticking to just a checklist in the brain. Greg Nuckols is normally joking around before taking world record attempts and laughing with the spotters as he sets up. The key is knowing what works for you.

You also need to consider if the PR is in training or competition. If you are in training, I wouldn’t recommend getting psyched up too much and/or too often. Getting psyched up to much can lead to adrenal fatigue, which can ruin the rest of your training because recovery is hindered. If it’s a competition, you can turn up a little for the big attempts. The key is being able to channel the energy.

At a big competition, I would take the following approach:

1st Attempt I would simply go over my mental check list, keep my pattern, and remember that I was doing exactly what I loved to do. Normally I would be smiling during my first attempt.

2nd Attempt Everything would be the same with just a little more focus and intensity.

3rd Attempt would normally be the Big PR or World Record. I wouldn’t change a thing except I would channel all my energy. Now what I am about to tell you is my personal way. That doesn’t mean that it will work for you. I would think about all the people that doubted me. I would remember all the hard things in my life that I had overcome. Last I would remember the people that I love, and that had always believed in me. 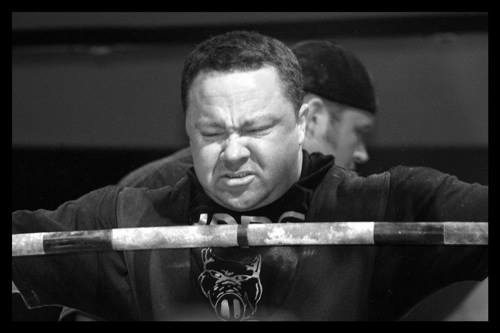 This thought process would channel an enormous amount of positive energy that I kept internalized. I would keep all of that energy inside until it was time to actually lift. I wouldn’t scream, yell, or shake. I was focused with positive energy waiting to explode. My pattern and approach didn’t change a bit. The result was normally a PR.

One of the things that holds lifters back is the ability to approach a personal record the same way they approach all other attempts. They get nervous and panic. Here are several other ways to prevent this:

• Same Warm-Ups- I suggest warming up the same way every day with the same jumps, reps, and sets.
• Patterning- approach the bar the same way, set up the same way, and take the same amount of time.
• Learn to relax and have fun! This was a game changer for me. I stopped getting nervous, and thought of training and competition the same way. Both were times for me to get together with friends that I cared about to do the very activity that I had loved my entire life. That’s it and nothing more. This over simplification will help relax you.
• Visualization- before approaching the bar, you should see the lift in your mind exactly the way that you want to perform the lift. I suggest practicing this technique as much as possible. You should be able to feel the bar in your mind. You should see the background, and experience as many senses as possible. The more real that you can make the visualization will make the technique better and better. Then you can go into auto-pilot during the lift. This will keep you from over thinking during the actual lift. You don’t want paralysis by analysis.

These are some ways that worked for me, and these are the ways that I try to teach my athletes to be successful during their heavy attempts. We are coming out with a new book in the future written by Nathan Hansen and me all about mindset and finding flow. After this book is complete, we will have programming, nutrition, muscular balance, and mindset covered by our E-Books and Online Services. Pretty exciting for me, and awesome for you!