Giving What You Get by Mash Mafia’s own Travis Elliott

Join the Mash Mafia Online Weightlifting Team and become a part of the family now! Check it out below:

Giving what you get. 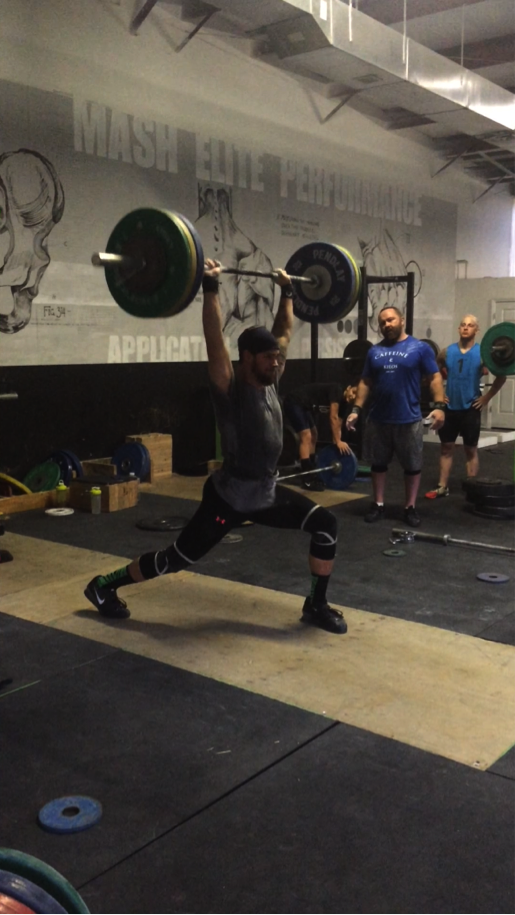 You get out what you put in! You reap what you sow! Become the change in the world you want to see! Three common quotes, one common theme; if you ever expect anything in this life you had better provide it first.

I came to the #mashmafia in early July. I wanted to be great at weightlifting. I am a 27 year old young professional with a lifelong history of athletics and only a short taste of glory in any of my athletic endeavors. The truth is that I’ve started this pursuit too late. The truth is that you need a decade of practice to become world class at the Olympic lifts. The truth is I don’t believe it, and if you want to force the issue, I’ll gladly change your mind for you, one way or the other.

I came to be coached by a legend, Travis Mash. I wanted the best coaching possible, but instead I found the best person ever. I wanted someone to look me in the eye and say, “Travis (same name, it’s weird I know), that was awful do it again.” Instead, I found someone to fist bump me after a PR and tell me to load another kilo because we weren’t done yet.

One thing I was uncertain of was the atmosphere. I had no idea what to expect. I had only seen videos of Mash Elite in Jon North rant videos on YouTube. Was this what I was walking into? Alright, bite down on the mouth piece, let’s do this. I had heard Travis speak on the Barbell Shrugged podcast and knew about his philosophy and training mentality. I was already in contact with Travis when episode 185 was released, and I knew in the least I had to give it a try. When I showed up I was honestly shocked. Everyone was super cool, and besides maybe a person visiting, I was the only weightlifter coming in the evenings. Trav began to tell me that he had some really strong dudes coming to train there full time and the weightlifting was about to take off. Man, was he ever right, nostrada-mash!

That’s the moment things changed. Dylan Cooper and Nathan Damron showed up and ripped the ceiling off the gym. Jacob, furthermore referred to as Rabbit, Wyatt moved back, Frank and Meg moved here shortly after and finally Tom Summa came into the fold. We have a 15 year old monster in Matt Wininger and Hannah Black an 18 year old girl crushing weights guys in “globo-gyms” can’t begin to move. In a short time I began to meet people I was watching lift online. I met Donovan Ford and Ariel Stephens randomly one afternoon. Soon we put a competition at Trav’s farm and I had the honor of kicking it with the Barbell Shrugged crew and made honest friends of all the guys and gals.

In a very short time I found myself at the bottom of a very tall totem pole. I was an incredibly small fish hanging out in the gigantic ocean. It was the moment I realized things had to change. I came to Mash Elite for great coaching and to become a better lifter, but I was always wanted the team atmosphere. I was training by myself before making the move and the new lifters all knew each other from national competitions and just being familiar family members of the mash mafia. I came to the realization that although I wasn’t going to be the strongest lifter in the room my role was still going to be vital. I wanted an environment where weakness did not exist; where every person was living to their upmost potential. I wanted it to be HYPE! I wanted noise, yelling, bar slamming, PR’s, coffee, blood, sweat, energy, most importantly I wanted it all.

That’s the moment I realized that if I wanted these things then the easiest way to have them was to bring them! If I could provide the energy and set the precedent of excitement it wouldn’t take long for it to spread. Through this we have built one of the most fun training environments around. We have people stopping by on their travels to have workouts with us, seminars hosted in house, and we’ve been invited to bring our training mentality and energy to other gyms just to spread the experience.

The reason I wrote this article is to invite other people to do that same in their gyms and barbell clubs. Bring the energy you want to receive. Give it to every member of your team and gym and when it comes time you will absolutely get it in return. Give love and you’ll be given it in return. Most every entrepreneur you speak with will tell you the same thing, if you give your gift away in love then in time you will become successful and you will receiving everything you’ve ever wanted.

Give what you want to get. Then soak in the returns.