Whether you want to lose weight, gain weight, or get jacked, check out the “Mash Eat What You Want Program” for all of you Nutrition needs. Check it out today at the link below:

Lately I have heard a lot of people talk about the “catapult technique”, or what they think is the “catapult technique”. There are simply a lot of wrong misconceptions as to what Don McCauley teaches, and I wanted to once again clear things up. First, let me say that I am not catapult or triple extension. I am a weightlifting coach, and I am going to teach whatever that works for the individual. However, Don has had a lot of influence as to the way that I coach.

Let me start by saying that the word “catapult” is not a technique. It is simply what happens when lifters use bar to body contact. It’s just a way of describing what happens, and that’s it folks. There isn’t a new technique. There is simply teaching weightlifting.

1. Elbows out and sweep back- this is the same thing that I was taught by Wes Barnett, two-time Olympian back in 1997 and Lyn Jones at my very first USAW Club Coach Certification in 1996. Elbows out will keep the arms longer and looser, and when the elbows break for the third pull, the bar remains close to the body. When coaches tell an athlete to sweep back, they are asking them to activate the lats and squeeze the bar in.

2. Shrug Down and Not Up- Some coaches talk about shrugging at the top of the lift, and some talk about shrugging down. Here’s the thing. Personally I don’t care what coaches teach on this one. Whether you teach shrug up or down, the athlete is going to shrug down when the weight gets heavy enough. All that you have to do is what the slow motion videos from hook grip. The shrug will take place as the feet are coming off the floor to move into the catch position.

Once again, both Wes Barnett and Lyn Jones taught me shrug down. I don’t care what coaches teach in this case because the body will naturally shrug down when the weight is heavy enough. To fight over this one is crazy because the motion happens naturally.

3. Open and Go- Now we are getting into the most highly debated topic. How much of the finish is too much, and how much is not enough. Most coaches in America will talk about “finishing the pull”. A lot of them want athletes to actively come up on the toes, shrug up, and pull the bar as high as possible. Don wants the athlete to open their hips, and then get under the bar.

Here’s the fact. The bar has come and gone from the body long before a lifter finishes at the top, so whatever you do at the very top of the pull is just follow through. You are not going to pull the bar one inch higher after it has left the body. No matter what you do, the bar is going to peak, settle in space, and then begin its descent back to the floor. The best athletes are going to be the ones that have the best timing. James Tatum has the best timing in weightlifting. He doesn’t spend one second longer than he has to at the top of the pull. He simply peaks the bar, and then he is under it.

With all of this being said, I don’t care what you tell your athletes as long as they are killing it. I believe that a lot of this happens instinctively in great athletes. When they spend enough time with the bar, they will simply figure a lot of these things out. Great athletes are going to figure a way under the bar. I will say this. Don has coached one Olympian and one Olympic alternate, so obviously his stuff works. If you haven’t coaches at least one Olympian, then maybe you should listen.

4. Trajectory of the Body at the Finish- I believe that there is a big misconception about what he teaches with regards to this topic. Don believes that most people will finish slightly past vertical (referring to the shoulders) at the top of the lift. Most but not all lifters at the World Level will finish slightly past vertical. However, this is not what Don always cues athletes.

The number one cue regarding trajectory is “stand up tall”. He believes that the slightly past vertical will happen naturally. However sometimes he will cue “slightly past vertical” if the lifters are too far forward at the finish. A lot of people think that he cues the lifters to pull way back, and I am not sure where they get this. Some think that he teaches them to bang the bar off of their hips, and once again I am not sure where they get this. All you have to do is look at his lifters. A lot of them are winning, so something is right. 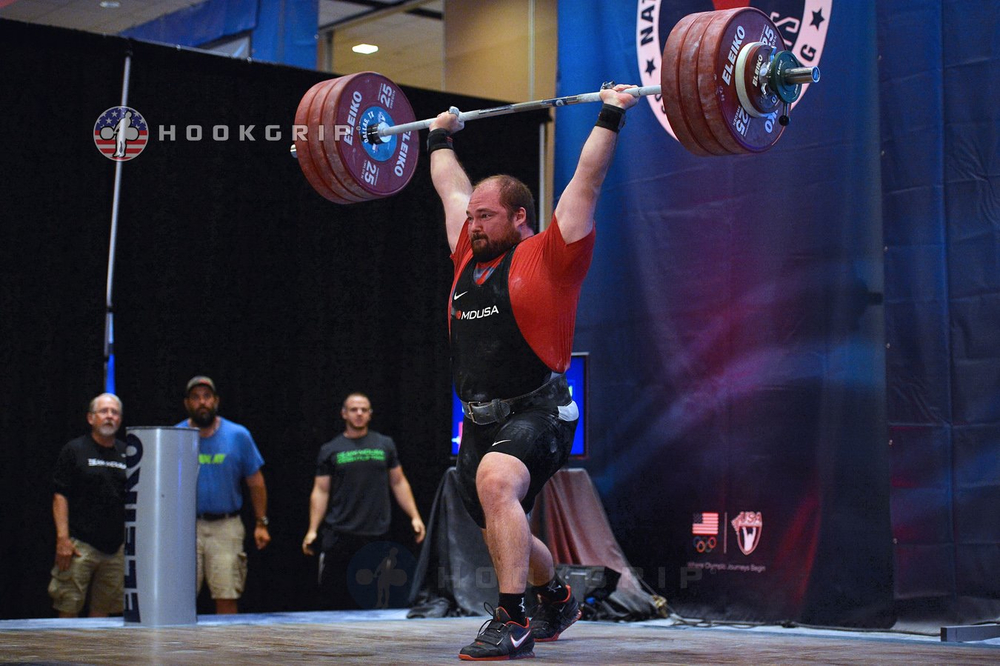 He teaches a drill where the back foot is driven down a few inches behind the lifter. It is practiced without a bar, and it is to get the lifter thinking about getting the back foot down as quickly as possible. It’s not the way the lifter will actually split. It’s just a drill. I believe that a lot of the misconceptions come from not knowing the difference in a drill and the way the coach teaches true technique.

Don teaches all of his lifters to distribute their weight back during the dip and drive. Then he wants a big drive vertical, and then get the back foot down and get under the bar. Sometimes when people are thinking about a big split, they are simply too slow getting under the bar. Don believes that the split will happen naturally. If you think too much about the split, you are going to be too slow to get under the bar.

When teaching the splits, he teaches front shin vertical, back knee slightly bent, and body remains vertical. Sound familiar? He also teaches both heels out. I mean most of what he teaches is weightlifting 101. I was taught the same thing in 1996. I am not sure where all the misconceptions came from.

Remember on September 17th-18th we will be hosting the Mash Barbell Picnic” on the Farm. Weightlifting Day 1 and Powerlifting Day 2, but more importantly hanging out together the entire weekend. Check it out below: