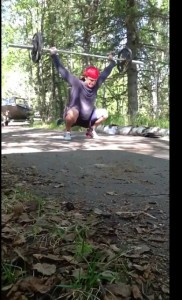 When I was first asked to write a blog for Mash Elite Performance, I wasn’t entirely sure what I would write about. In fact, I am still not really sure. After all, I am an 18-year-old rookie who has just started down this weird road called adulthood. I have been sitting here trying to figure out the best way to explain my “Mash Elite Experience” for a while… and I have decided to break it into three sections. The first section will explain a little bit about myself. It will be my background. Section two will entail my move down to North Carolina and some of the things that I have learned in the past few months. Finally, the third section will explain what I have decided to commit myself to, and the direction that i am looking to take my life in the future.

Many people reading this probably aren’t even sure who I am or where i come from. My name is Cooper Hanson and I was born and raised in a town called Wasilla, Alaska. I played hockey from the age of three until I turned 17 years old. In the summer of 2012 my brother and I got our hands on an old rusty barbell, a set of 45 pound plates, and a tractor tire. This was the start of “The Hanson Home Gym”. Around this time I stumbled across a YouTube video titled, “Donny Shankle Is Bigger Than You”. I began to take serious interest in the sport of weightlifting. Throughout the summer I worked a job roofing and played American Legion Baseball. Every time that I had a day off you could find me and a friend or two in the driveway attempting to get stronger. I began to experiment with snatches and clean & jerks as well. So here I was, a 17-year-old kid doing snatches with a bar that didn’t spin while wearing Chuck Taylors on an uneven driveway. I will never forget those days. In the next school year I began to take weightlifting more seriously. Training in my high school weight room I increased my best numbers to a 105 kilo snatch and a 120 kilo clean and jerk. Around that same time I began emailing Travis Mash about possibly joining his weightlifting team. I honestly wasn’t sure how I could join his team, considering it was on the opposite side of the country. I emailed with him back and forth and he told me that if I came to the gym in North Carolina, I could have a try out. The school year ended, and it was time for me to depart Alaska. I turned 18 years old and graduated on the same day… two days later I packed up a suitcase and my gym bag and left for North Carolina. I left behind my family, my friends, and my beautiful girlfriend of two years.

Through some divine miracle, Travis saw some potential in me as a lifter, and decided I would be a good addition to the team. I was introduced to Chuck Hendo, who has become a bit of a father figure to me, and I was given the opportunity to stay with him in a house we call “The Muscle Hut” here in Advance, North Carolina. I have now been living here for almost four months. It’s crazy to me how much one person can learn and grow in such a short period of time. I had to learn how to be a good roommate and be a good teammate, and I had to learn fast. In these four months I have had a few ups and downs, that’s for sure. Learning to deal with my own problems in and out of the gym has always been something I have struggled with. Being away from the comfort of home, I was faced with no other option then to grow as a person. I think about home and everyone there every single day. Without the support from everyone at the gym, my family and girlfriend back home, and my teammates, I would not have the strength required to do what I am doing. I have learned to be patient with people around me as well as myself, and I have learned that trusting myself is always the best option. People have told me that they wish they could do what I did, move across the country in pursuit of their dreams. My response is always the same, “It’s just a matter of doing it”. I decided that I wanted to be a weightlifter and train under Travis Mash, so I made it happen. Persistence and confidence gave me opportunity which I took advantage of to make my dream a reality. The first step to success is action. Without action, your dreams will never be more than dreams. They will never become a reality.

Section 3: My Purpose and Direction

I firmly believe that there are certain segments of literature or speeches from which people constantly draw their ideas and philosophies. For me it is a segment from Ralph Waldo Emerson’s “Self Reliance”. Emerson said

“There comes a time in every man’s education when he arrives at the conviction that envy is ignorance; that imitation is suicide; that he must take himself for better for worse as his portion; that though the wide universe is full of good, no kernel of nourishing corn can come to him but through his toil bestowed on that plot of ground which is given him to till.”

The very first time I read this I knew that I had found my direction. In the past year I have worked to accept myself for who and what I am at that moment. I accept my abilities, but I do not forget the fact that I am also capable of exponential improvement. This improvement however, will not come from anything besides the effort that I put into whatever I am doing. The idea of self-improvement is what I now focus on. In the future I aim to simply improve myself, and the people I surround myself with. In life, I believe there is nothing more important than the improvement of oneself, or one’s self-image. However you decide to make these self-improvements is completely up to you. Whether it is through God, through weightlifting, whatever. The central focus is self-improvement, both mentally and physically. I believe that at 18 years old, I have already found my purpose. My purpose in life is to help other people improve themselves while improving myself as well. I am now living in Advance, North Carolina and am a full-time weightlifter for the Mash Mafia Weightlifting team. I am exactly where I want to be, doing exactly what I want to do. I have found the direction which I want to take myself, and I am now moving forward towards my goals every single day.

You don’t have to move from Alaska to be on the team. To join the Online Mash Mafia Team, go to www.MashElite.com/join-the-online-team/.

For personalized online coaching centered around anything that you want (powerlifting, crossfit, get jacked, etc.), go to https://www.mashelite.com/online-programming/.